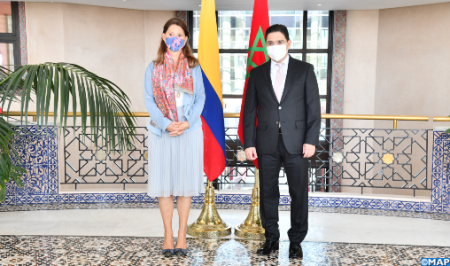 Morocco and Colombia reiterated, Thursday in Rabat, their commitment to continue to promote and strengthen political, trade, energy, economic, cultural and academic relations. In a joint statement issued after the talks of the minister of Foreign Affairs, African Cooperation and Moroccans Abroad, Nasser Bourita, with the Vice President and Minister of Foreign Affairs of Colombia, Marta Lucia Ramirez, on an official visit to the Kingdom (from October 28 to November 1), the two officials reiterated their commitment to continue to promote these relations, by exploring opportunities to strengthen bilateral trade and taking into account the complementarity and respective potential of the two countries, especially in renewable energy, trade, infrastructure and tourism. Regarding economic and trade relations, the two ministers committed to seek new mechanisms to expand and diversify trade and explore investment opportunities, through the establishment of productive platforms that facilitate access to markets with their respective regions, urging Moroccan and Colombian experts to hold sectoral meetings, establishing a roadmap with priorities to this end, added the Joint statement. Also, the two ministers welcomed the convergence of views on many issues, both regional and international ones, and promised to increase cooperation and coordination in international and regional organizations, agreeing, in this regard, to work together to strengthen multilateral diplomacy and in global forums, in which both countries are active. In the areas of cultural and educational cooperation, both sides agreed on the relevance of continuing to promote and expand them to various sectors of common interest, through academic activities and exchanges between academic institutions of both countries. In addition, the two ministers decided to extend cooperation in cultural matters through exchanges between the Mohammed VI Museum of Modern and Contemporary Art and the Gold Museum of the Bank of the Republic of Colombia. They also decided to launch, very soon, two integrated programs in the field of agriculture (irrigation systems, soil mapping, fertilizers, etc.) in two regions of Colombia to be identified in the Atlantic and Pacific coasts. The two ministers agreed to establish programs for the exchange of experiences and good practices in the field of social economy, especially in favor and with the participation of women in rural areas. Following the acts signed at the working meeting held on April 6, 2021, the two sides exchanged notes on the entry into force of the Agreement on visa waiver for holders of ordinary passports, which will result in a great strengthening of human, tourism, economic, social, commercial and academic exchanges between the two friendly countries. Regarding the invitation to Nasser Bourita to make a working and friendship visit in Colombia, the Minister expressed his intention to pay the visit during the year 2022. Expressing satisfaction with the progress made and mutual understanding, the Vice President and Minister of Foreign Relations of the Republic of Colombia, Marta Lucia Ramirez, commended the warm welcome and hospitality received during her visit to the Kingdom of Morocco, according to the joint statement. At the invitation of the Minister of Foreign Affairs, African Cooperation and Moroccans Abroad, Nasser Bourita, Marta Lucia Ramírez, is making an official visit to the Kingdom of Morocco, from 28 October to 1 November 2021. This visit was an opportunity to praise the excellent level of bilateral relations between the Kingdom of Morocco and the Republic of Colombia and reaffirm the common will of His Majesty King Mohammed VI and His Excellency President Iván Duque Márquez, to continue to consolidate the fruitful multidimensional association that fortunately exists between the two countries, both bilaterally and multilaterally and particularly as part of South-South cooperation.