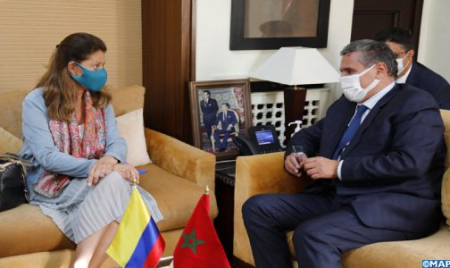 The Head of Government Aziz Akhannouch held talks on Thursday in Rabat with the Vice President and Minister of Foreign Affairs of Colombia Marta Lucia Ramirez. The meeting was an opportunity to discuss various questions of common interest, Akhannouch told the media, welcoming the position of Colombia supporting the Moroccan Sahara. During this meeting, talks focused on ways to consolidate bilateral cooperation, particularly between private sector actors and to create investment opportunities for both countries. For her part, Ramirez welcomed the special ties between Rabat and Bogotá, noting that Morocco, through these relationships, can set itself up as a gateway to Africa for Colombia, which can also play the same role for Morocco in Latin America. “We discussed several topics related to the challenges and opportunities for cooperation between the two countries. We also reviewed several sectors in which bilateral cooperation must be consolidated, including agriculture,” she added, expressing the willingness for her country to benefit from the distinguished expertise of Morocco in this area. Relations with Morocco are likely to open opportunities for economic development and create employment for the youth both in Colombia and throughout Latin America, particularly since the two countries share common visions and priorities on several questions, she added. The Colombian official also said that instructions have been given to the new Colombian Ambassador in Rabat to extend the consular jurisdiction of the Colombian Embassy in the Kingdom of Morocco over the entire Moroccan territory, including the Sahara.