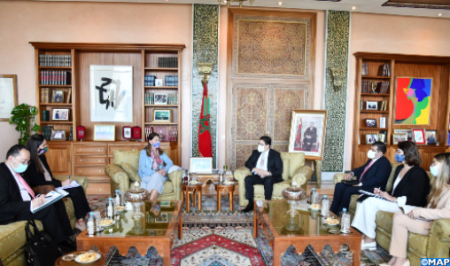 Colombia and Morocco highlighted on Thursday in Rabat, the similarity of their vision of a migration policy that safeguards the legitimate rights of migrants and guarantees their dignity. “Colombia and Morocco converge in their vision of a migration policy that safeguards the legitimate rights of migrants and guarantees their dignity,” said the joint statement following talks between the Minister of Foreign Affairs, African Cooperation, and Moroccans Abroad, Nasser Bourita, and the Vice-President and Minister of External Relations of Colombia, Marta Lucia Ramirez. According to the joint statement, Bourita and Ramirez agreed, given the impact of the migration phenomenon that “it represents a real challenge for the international community.” In this context and concerning the crisis in Venezuela, Bourita “welcomed the extensive work carried out by Colombia to address the humanitarian situation resulting from the large number of Venezuelan migrants arriving in the country,” stressing the importance of Colombia adopting the Temporary Protection Status for Venezuelan migrants and granting the Temporary Protection Card. In addition, Bourita reiterated the support of Morocco to the policy of “Peace with Legality” led by the President of Colombia, Ivan Duque Márquez, and the multiple actions of stabilization undertaken by Colombia in the implementation of peace agreements. He hailed the efforts of President lván Duque Márquez and his Government in the area of peace and legality, as well as the improvement of conditions in the country’s regions and the impact of these measures in terms of stability and perception, the joint statement stated. Bourita also welcomed the decision announced by the Prosecutor General of the International Criminal Court to close the preliminary file on Colombia.