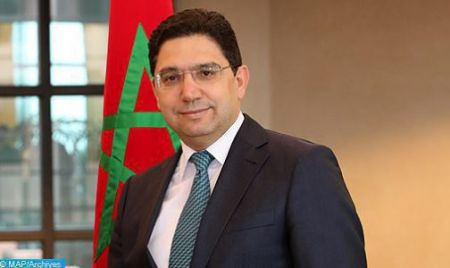 Minister of Foreign Affairs, African Cooperation and Moroccans Abroad, Nasser Bourita, met, Thursday in Rabat, with the Vice President and Minister of External Relations of Colombia, Marta Lucía Ramírez. At a joint press briefing after the talks, Bourita said that Morocco and Colombia have “very good” relations whose fortieth anniversary of diplomatic ties was celebrated two years ago. This meeting was an opportunity to reaffirm the “remarkable” evolution of bilateral relations in all areas, in accordance with the vision of HM King Mohammed VI and the President of Colombia Iván Duque, added the minister, affirming that the two countries share the same visions, perceptions and priorities on many issues. For her part, Ramirez highlighted the special ties between Morocco and Colombia, stressing that through these links, the Kingdom can stand out as a gateway to Africa and vice versa for Colombia in Latin America. “We discussed several topics and reviewed a series of sectors in which cooperation must be strengthened, such as industry, infrastructure and agriculture, an area where both countries have an important vision,” she added. The talks between the two parties were marked by the adoption of a joint statement.