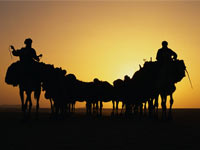 Morocco and the Polisario held the first round of negotiations in Manhasset on June 18-19 under the auspices of the United Nations and in accordance with United Nations Security Council resolution 1754 of 30 April 2007 which called upon the parties to "enter into negotiations in good faith and without preconditions". The parties met again on August 10-11 and the second round of talks wrapped up with the parties agreeing that the status quo is unacceptable and the process of negotiations will continue. What is important at this stage is that the parties agreed to continue dialog.
During these two rounds, Morocco presented its autonomy proposal that was described as serious and credible by the five member countries of the Security Council and backed by other influential capitals.
While Morocco proved good faith and a true will to solve this artificial problem definitely and reach a just and fair solution, the other party chose the status quo by pretending to stick to self-determination.  The Polisario is not in a situation where it can make an independent choice; in the meantime, it can no longer keep waiting the population in Tindouf which is showing a growing interest in the Moroccan proposal.
The Sahara issue is not a matter of de-colonization, but rather a political problem that requires pooling the efforts of all the parties involved to reach a final solution.
There is not any document at the level of the United Nations, the Arab League, the Organization of the Islamic Conference or the European Union, which describes it as a de-colonization issue.
Morocco and Spain discussed the Sahara de-colonization long before the formation of the Polisario due to the fact that Morocco was among the African Countries subject to double protectorate. Spain occupied several cities in the north and the south of Morocco and the recovering of these zones took place in different stages.
We believe that the Moroccan autonomy initiative is a consensual political solution that meets all parties' stances and meaningful autonomy is a promising and realistic way forward.
The initiative could provide a realistic framework for future negotiations and what is important, is to be able to make progress from a round to another and achieve results, even partial.
Morocco will always maintain its positions of a country respectful of the international legality, strengthened by its national unity and open to a dynamic approach.