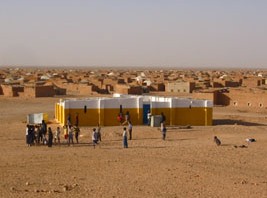 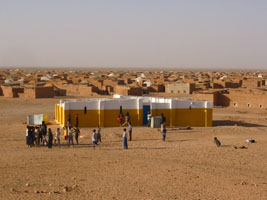 In an effort to solve the Sahara conflict, Morocco proposed autonomy to its southern provinces (the Sahara). The initiative was welcomed as serious and credible by several influential capitals. Morocco has, since the recovery of its territories in 1975, made enormous efforts on the path of economic and social development, which far outdistances the revenues yielded from local resources.
The question is how long Algeria, still threatened by islamists and by now devoid of the old Soviet bloc and +non-aligned+ diplomatic and political support will continue to place its unattainable regional ambitions (such as access to the Atlantic) ahead of more practical national security interest that requires cooperation with its Moroccan neighbor.
Restrictions are imposed by the Polisario forces and nearby Algerian military to access the Tindouf camps including the United Nations Higher Commissioner for Refugees, and there is a lack of transparency in the distribution of humanitarian aid.
The situation in Tindouf camps becomes more and more hopeless in view of extortion and exploitation acts committed against the population by the Polisario members.
Many people who came back from the Tindouf camps as part of family visits exchange can bear witness to this fact, and some of them even preferred to stay among their families in the Sahara to live in stability and dignity in motherland Morocco.
Returning home is the best alternative solution to a life full of despair and misery endured by the populations there.
The issue of Sahara and Polisario itself, which is now increasingly weakened by internal divisions, are remnants of a passed era and should be buried.
An independent and defenseless Sahara could only be seen as an ideal scene for Islamist to set up in the Sahel thereby offering an additional threat to the entire region. It would be another Somalia at the western end of the Sahara.
The dispute over Morocco's Southern Provinces is a fabricated regional conflict that broke out following the recovery by Morocco of its occupied territories, and is not a political-military conflict
Morocco is at home in its southern provinces. The various delegations that paid visits to the Sahara could freely get round and witnessed the peacefulness enjoyed by the population.