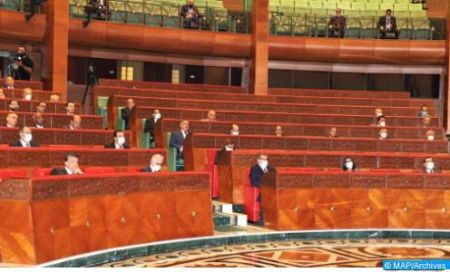 A delegation of the House of Advisors held a series of meetings with components of the Andean Parliament, focusing on ways to strengthen cooperation between the two legislative institutions on the sidelines of its participation in Colombia in the activities to commemorate the 42nd anniversary of the creation of the Andean Parliament. The delegation, composed of Ahmed Lakhrif and Abdelkader Salama, also held a meeting with President of the Andean Parliament, said a statement by the House of Advisors, adding that on this occasion, Lakhrif made a speech before the General Assembly of this parliamentary body. During its meeting with the components of the first standing committee of the Andean Parliament (parliamentary diplomatic committee and foreign relations), the Moroccan delegation said it was determined to give substance to the distinguished relations between the two institutions through action plans and a roadmap in accordance with defined mechanisms and clear objectives, the same source said. The members of the committee, chaired by Bolivian deputy Alicia Ticona and including vice-president Gustavo Pacheco (Peru) and deputies Araceli Ceballos (Ecuador) and Cesar Ortiz Zorro (Colombia), welcomed the presence of the Moroccan delegation and the importance of its visit, which is able to promote exchanges and sharing of experiences and Moroccan expertise, especially in alternative energy, water policies, the National Immigration Strategy and the management of migration issues in general, according to the same source. The Moroccan delegation also held a meeting with Peruvian Fernando Alvarado Vice President of the Andean Parliament, devoted to the review of historical Moroccan-Peruvian relations which are rooted in deep ties and common values, able to withstand the cyclical changes born of a great misunderstanding of the reality and evolution of the conflict of the Moroccan Sahara, added the statement.