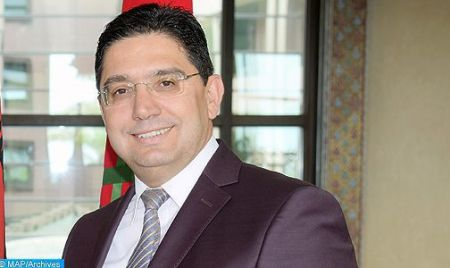 Minister of Foreign Affairs, African Cooperation and Moroccans Abroad, Nasser Bourita, welcomed, Friday, the resolution 2602 of the UN Security Council, saying it reinforces the achievements of the Kingdom in the Sahara issue, made possible thanks to the personal commitment and permanent monitoring of HM King Mohammed VI. “Morocco welcomes this important resolution in view of its context, its content and the positions expressed during its adoption (…), and which reinforced the gains made by the Kingdom in this question,” said Bourita at a press briefing held following the adoption of resolution 2602 which extended for one year the mandate of MINURSO, while enshrining, once again, the pre-eminence of the Moroccan autonomy initiative to resolve the artificial conflict over the Moroccan Sahara. This resolution, adopted with 13 votes in favor and two abstentions, is important because it comes at a time when Morocco has made many achievements since the resolution of October 2020, he added. Among these achievements, the UN SG cited in his last report the securing of the border post of El Guergarat and the restoration of free movement at its level, the recognition by the United States of the Moroccan Sahara and the opening of several consulates in the southern provinces of the Kingdom, said Bourita, stressing that these achievements are part of the major developments that have experienced this issue. Resolution 2602 provides five “important” responses to the maneuvers and agitations of opponents of the territorial integrity of the Kingdom, said the minister. The first answer relates to the format of the process, he explained, noting that the Security Council has affirmed that the roundtable meetings, with the participation of all parties, are the only mechanism for managing it. The second relates to the finality of the process, which must lead to a realistic, practical and compromise-based solution. According to Bourita, these qualifiers cause anxiety to other parties because they refer to the Moroccan autonomy plan and dismiss any other option that is not realistic. The Security Council has responded to all the maneuvers hatched in this framework, said the minister. Regarding the third response, he added, Algeria, cited 5 times in the resolution, as well as Morocco, has a responsibility to assume in this matter. Based on this, the resolution of the Council states that Algeria is called upon to get involved throughout the political process for its success. The Security Council provided another response, the fourth, in connection with the breakdown of the ceasefire. The UN executive body expressed its “deep concern” and “we know the party that has officially announced its withdrawal from the related agreements at a time when Morocco had reaffirmed its commitment to respect its provisions,” said Bourita, stressing that the concern of the Security Council sends a message to the parties jeopardizing the ceasefire to assume their responsibilities. According to Bourita, it is also a strong message to Algeria and the polisario that the international community will not allow any attack on stability in this region. As for the 5th answer, it is related to the gains made by Morocco through the resolutions adopted by the Security Council in recent years. Bourita, in this sense, reported attempts to undermine these achievements which are all now contained in resolution 2602. Among which, noted the minister, is the autonomy plan as a realistic, practical and credible and only prospect of settlement of the Sahara issue. Bourita said that attempts have also been made in connection with the issue of human rights, saying that the Security Council knows how to distinguish between one-upmanship, disruption and reality. “Neither the mandate of MINURSO nor the issue of human rights was mentioned in the resolution. On the contrary, the registration of detainees and the responsibility of the country sheltering them in Tindouf are explicitly mentioned (…). The Council calls for their registration so that they can preserve their rights against violations of international humanitarian law,” he insisted. The same goes for the multiple attempts to involve regional organizations such as the European Union and the African Union in this process. The resolution makes no reference to this, said Bourita. These are direct and clear answers that were given by the Security Council to the maneuvers and agitations that were intended to lead to believe that the Council would reconsider its parameters, stressed the minister, ensuring that the answer was clear about the format, the purpose and the real actors in the process as well as those responsible for breaking the ceasefire. “Morocco thanks the countries that have supported this resolution, including France and the United States, which have expressed strong support for the autonomy proposal as the only framework for resolving this issue,” added the minister. He emphasized that Morocco has interacted with serenity with the adoption of the resolution that it considers a “normal event”, unlike the other parties who were struggling, in vain, to make it a turning point. Regarding the appointments of Staffan de Mistura as personal envoy of the UN SG for the Moroccan Sahara and Alexander Ivanko, head of Minurso, Bourita said that Morocco, a responsible state, cooperates with the UN in the framework of respect and transparency and acts in accordance with the parameters defined by resolution 2602 which are “clear and must be respected.” The Security Council “decides to extend the mandate of MINURSO until 31 October 2022,” reads the text of the resolution presented by the United States. In this text, the executive body of the United Nations has enshrined, once again, the pre-eminence of the autonomy initiative, presented by Morocco on April 11, 2007, welcoming the “serious and credible” efforts of the Kingdom, reflected in the Moroccan proposal.