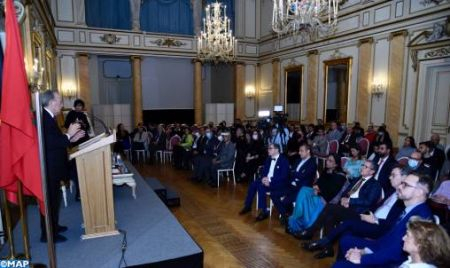 Eminent constitutional experts highlighted, Friday in Brussels, the democratic alternation in Morocco enshrined by the triple vote of September 8 and which makes the Kingdom an exceptional model in the region. During a conference organized at the prestigious “Cercle gaulois artistique et littéraire” by the Moroccan Embassy in Belgium and the Grand Duchy of Luxembourg and the Belgian Association of Friends of Morocco, participants in this event emphasized the uniqueness of the Moroccan model whose recent elections are the very illustration of democratic maturity and the relevance of political, economic and social choices initiated under the impetus of HM King Mohammed VI. Opening the conference, the Moroccan ambassador to Belgium and the Grand Duchy of Luxembourg, Mohamed Ameur, said that this meeting is part of the cycles of conferences initiated by the Embassy of the Kingdom with the aim of both informing the public of major developments in Morocco, which “occupies a special place in Belgium and maintains relations that have been consolidated over recent decades by the presence of a strong dynamic and integrated community”. This cycle of conferences also aims to enrich the debate and exchange on issues of common concern, including those related to the Euro-African partnership which will be the subject of the next meeting in December, added the ambassador. Before an audience of diplomats, academics, politicians, economic operators, students and members of the Moroccan community, the Belgian Constitutional expert Francis Delpérée, also president of the Association of Friends of Morocco, welcomed the successful conduct of the three elections (legislative, communal and regional) held on September 8 in the Kingdom “which have enshrined democratic change in Morocco”. For this politician, former MP and senator, these elections are in perfect harmony with the provisions of the Moroccan Constitution. “This triple vote, which took place in the forms required by the Constitution of 2011, is proof of the strength of constitutional mechanisms and the maturity of political actors in Morocco,” he said. The political expert Mustapha Sehimi referred, for his part, to the highlights of these elections, focusing in particular on the increase in voter turnout compared to the elections of 2016, noting that the high turnout (50.35% nationally) is significant of a strong electoral mobilization. For him, these elections have also allowed a renewal of skills and have been marked by a strong female representation that proceeds from a desire to “empower women in the management of public affairs”. He noted in this regard that this increasingly important presence of women in the Moroccan political landscape is in line with a change in Moroccan society and “a long march for the advancement of women”. Regarding the prospects of Morocco-EU cooperation, the expert noted that the Kingdom has many assets to consolidate its international partnerships and has a “radiant” foreign policy under the leadership of HM King Mohammed VI.