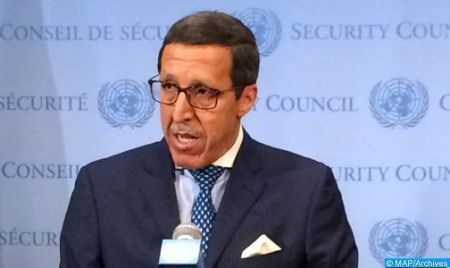 Permanent Representative of Morocco to the UN, ambassador Omar Hilale said in New York that Algeria “has a political agenda that it uses as an outlet for its problems”, while Morocco “has a sacred national cause that unites a people and a Monarchy of five centuries”. Speaking at a press conference held after the adoption by the Security Council of Resolution 2602 extending the mandate of MINURSO for one year, Hilale also stressed that in the face of the “obsessive relentlessness” of Algeria, the Kingdom opposes resilience, wisdom and restraint. It is “an obsessive relentlessness that is more psychiatric than political,” the diplomat lamented. The ambassador said, in this context, that Algeria “instrumentalizes the principle of self-determination for political purposes, thinking that it has a monopoly on the use of this principle to do whatever it wants”. “Algeria has captured this principle and has replaced the United Nations,” he said. On the other hand, Morocco defends its territorial integrity, a principle as old as the states of the world, said Hilale, recalling that Morocco “exists as a state for 12 centuries”. In the same vein, the ambassador pointed out that the principle of territorial integrity is a right as old as humanity, that to self-determination is a positive law that was established only in 1960 under Resolution 1514, which also enshrines the principle of territorial integrity. He also pointed out that Algeria uses the Tindouf camps as a “symbol” of the existence of a conflict, while Morocco “has the Sahara that is developing”, with a population which participates in political, economic, social and democratic life. “Algeria has a proxy, namely an armed separatist group, while Morocco has a population of the Sahara attached to its Moroccanness,” the diplomat insisted. “Morocco is strong of this unity between the people and the King,” he said. Similarly, Algeria “diverts” humanitarian aid, with the polisario, as evidenced by the reports of the UN SG, the Office of the High Commissioner for Refugees, the World Food Program, the European Anti-Fraud Office and NGOs, the ambassador noted, adding that on the other hand, Morocco is committing investments in the order of eight billion dollars for socio-economic and infrastructure projects.