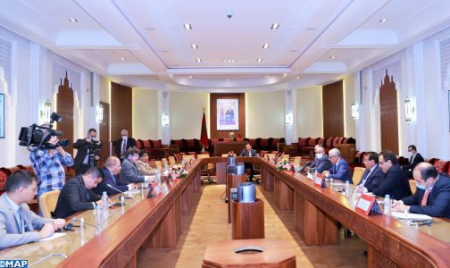 The strengthening of relations between the Moroccan parliament and its Latin American counterparts was the focus of a meeting, Tuesday in Rabat, between speaker of the House of Representatives, Rachid Talbi Alami, and president of the Global Africa Latina Foundation, Antonio Yelpi Aguilar. Speaking on this occasion, Talbi Alami highlighted the close relations linking the House of Representatives with several parliaments in Latin America, which have contributed to strengthening the process of rapprochement between the Kingdom and the countries of this continent, noting that the Moroccan Parliament is an observer member in several Latin American parliaments. The House of Representatives is engaged in a permanent debate with the parliaments of Latin America, “in order to consolidate the role of Morocco as a reliable partner and to continue the dynamics of rapprochement and exchange of experiences between Morocco and the said countries,” he stressed. In this regard, Talbi Alami noted that this orientation requires the continuity of the communication bridge and the strengthening of cooperation between Africa and Latin America, as part of the policy of openness advocated by HM King Mohammed VI, as well as the interest that the Sovereign grants to South-South cooperation. For his part, president of the Foundation Global Africa Latina, Antonio Yelpi Aguilar, noted that this meeting is part of the strengthening of cooperation relations in the political, economic, academic and cultural fields, with a view to consolidating trust and dialogue between Morocco and Latin American countries. A real opportunity is to seize today to revitalize the groups of friendship between Morocco and the countries of Latin America, including Peru, Bolivia and Nicaragua, he said. He also commended the role that Morocco plays in this framework, noting that the dialogue and bilateral cooperation, especially after the health crisis, is the ideal way to achieve the desired objectives of both continents.