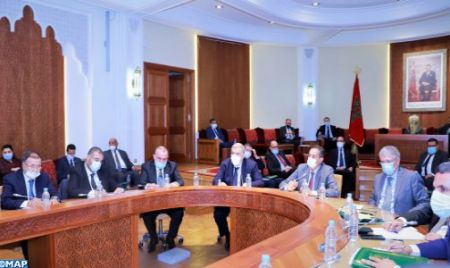 Interior Minister Abdelouafi Laftit said Wednesday in Rabat that the latest elections represent a historic turning point par excellence on the path of democracy, under the enlightened leadership of HM King Mohammed VI, guarantor of the sustainability of the democratic choice and the proper functioning of constitutional institutions. Outlining the broad outlines of his ministry’s sectoral budget for the year 2022 at a meeting of the Committee on the Interior, Local Authorities, Housing and Urban Policy at the House of Representatives, he said it is possible to consider this success as evidence, if necessary, of the strength of the democratic experience in Morocco, given the fact that the latest elections are the third organized after the major political and constitutional reforms carried out since the new constitution of 2011. He emphasized that the success in the organization of these elections reinforces the achievements accumulated and strengthens the trust of citizens in the political act and action, also illustrating the heavy responsibility resting on the public authorities in their mobilization in favor of the completion of the projects and reforms launched under the enlightened leadership of HM King Mohammed VI. He also noted that despite the exceptional circumstances related to the epidemic of Covid-19 which required a strong and broad mobilization of central and territorial services of the Ministry to limit the scope of its spread and its impact, the Ministry of the Interior has managed, nevertheless, to continue tirelessly the implementation of large-scale projects, ensuring to find efficient solutions that are adapted to the situation, in addition to maintaining order and security of goods and people. In this national and international context marked by the unfortunate repercussions of the pandemic that has weakened the economy and caused structural imbalances, he added, the Kingdom should be proud of having been able to organize within the legal deadlines the elections planned and, moreover, were held in full compliance with preventive measures. Laftit also said that the draft sectoral budget of his ministry for the year 2022 is part of the government program and the expected prospects, in accordance with the High Royal Directions to establish a comprehensive strategic vision based on a progressive reflection on the New Development Model through the launch of a new generation of programs and development projects, especially in the socio-economic field, particularly social protection, care for the disadvantaged, construction of local infrastructure, reduction of social and territorial disparities, and strengthening of solidarity and human development mechanisms. He concluded that the project is of crucial importance as it represents a new step forward on the path of consolidation of the achievements made under the farsighted leadership of HM King Mohammed VI, namely the constitutional and political reforms as well as the notable achievements on the economic and social levels, with always the concern to answer the immense challenges posed before the country, in particular as regards the social expectations expressed in an increasingly insistent manner or on the level of the protection of the supreme interests of the nation in the face of the maneuvers woven by the enemies of the Kingdom abroad.