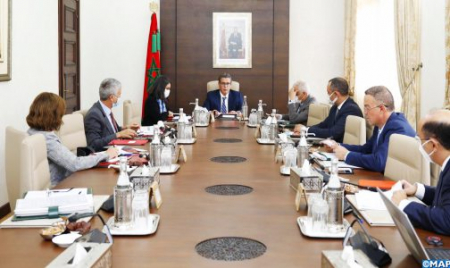 The Head of Government, Aziz Akhannouch, chaired, Wednesday evening in Rabat, a meeting dedicated to the examination of the necessary measures to carry out the project of the generalization of social protection in application of the High Royal Guidelines contained in several speeches of HM King Mohammed VI, aimed at reinforcing the foundations of the welfare state. This meeting also touched on the means to speed up the implementation of the major social projects undertaken by the Kingdom and to implement the commitments contained in the government program with regard to social protection, says a press release from the Department of the Head of Government. During this meeting, the Head of Government recalled the importance that HM the King attaches to the promotion of the social sector, in parallel with the efforts made to achieve the economic development of the Kingdom, mentioning, in this regard, the call for a profound revision of the social protection system following a clear and precise agenda until 2025, which was launched in 2018 by the Sovereign in the Throne Speech. Akhannouch also referred to the Royal Guidelines relating to this unprecedented national project, which requires, as His Majesty the King underlines, a real reform of existing social systems and programs in order to strengthen their direct impact on the beneficiaries, in particular with the establishment of the unified social register, noting that this project should be a lever for the integration of the informal sector into the national economic fabric. The Head of Government recalled the Royal Guidelines, contained in the Royal speech on the occasion of the opening of the 1st session of the 1st legislative year of the 11th legislature, on October 8, in which the Sovereign considers that the new government is responsible, during its mandate, for setting up priorities and projects as well as mobilizing the necessary financial resources, within the framework of the implementation of the New Development Model. The government is also expected to complete major projects, including the generalization of social protection, which benefits from the high royal solicitude, the release adds. Akhannouch called on the members of the government concerned to build on these high royal guidelines as well as on the commitments contained in the government program relating to the generalization of social protection and the strengthening of the foundations of the welfare state, and to reflect on the means that could support the implementation of the generalization of social protection, noting that the issue of the Compulsory Health Insurance (AMO) constitutes the first step of this work. To achieve these objectives, and after examining all the steps and measures taken, the Head of Government called on all the stakeholders concerned to increase efforts and mobilize all means to achieve the objectives set out by His Majesty the King for this societal project. This meeting took place in the presence of several members of the government, including the Minister of Economy and Finance, the Minister of Health and Social Protection, the Minister of Agriculture, Fisheries, Development, Water and Forests, the Minister of Industry and Trade, the Minister of Tourism, Handicrafts and Social and Solidarity Economy, the Minister Delegate to the Minister of the Economy and Finance, in charge of the Budget, the Minister Delegate to the Head of Government in charge of Investment, Convergence and Evaluation of Public Policies, and the Director General of the National Social Security Fund.