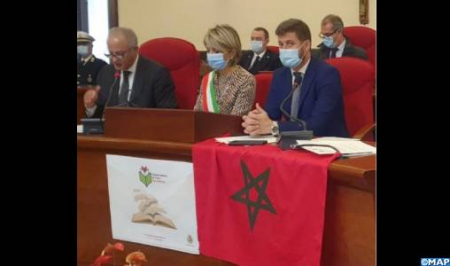 The Embassy of the Kingdom of Morocco in Italy and the Italian municipality of Vibo Valentia signed Friday a joint declaration to strengthen their bilateral cooperation in the economic, cultural and social fields. On this occasion, the Italian municipality expressed its support for the Moroccan initiative for the negotiation of an autonomy status for the Sahara region, described by the UN as “serious and credible” and conducive to ensuring a negotiated and consensual political solution to this regional dispute. The municipality of Vibo Valentia has reiterated, through this declaration, its willingness to strengthen the partnership with Morocco, in terms of local administration, decentralization and twinning, welcoming the work of advanced regionalization conducted by the Kingdom that has enabled the establishment of a new dynamic policy of territorial management. The Italian party welcomed the positive evolution of the country, under the aegis of His Majesty King Mohammed VI, in terms of democracy, human rights, economic progress, promotion of the status of women and consolidation of the culture of dialogue between civilizations. The Embassy of the Kingdom and the Municipality of Vibo Valentia are committed to promoting economic cooperation and trade through the organization of economic missions aimed at creating investment opportunities. Speaking on this occasion, the Moroccan ambassador to Italy, Youssef Balla, said that this partnership takes place in a context where Moroccan-Italian relations have a new impetus after the signing of a multidimensional strategic partnership, in November 2019, in Rabat, with the aim of consolidating political, economic, cultural and financial relations in areas of mutual interest.