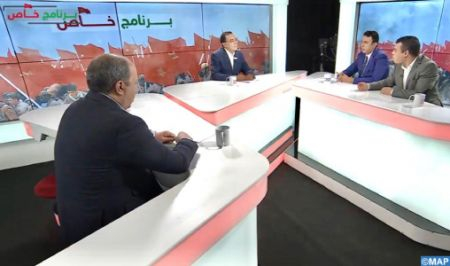 The royal speech reaffirmed the Moroccanness of the Sahara as well as the Kingdom’s commitment to the UN political process, experts and academics underlined during a special broadcast live on Saturday on M24, the Moroccan news channel of MAP. During this broadcast on the occasion of the speech that HM the King delivered to the Nation on the occasion of the 46th anniversary of the Green March, the speakers noted that the speech affirms once again the Moroccanness of the Sahara, which “is not negotiable”, and reiterates the commitment of the Kingdom in favor of the search for a peaceful solution to this artificial regional conflict in the framework of the United Nations. The royal speech initiates a new stage in the process of settling the first national issue, said Abdelfettah Belamchi, professor of international relations, during this program also broadcast live on the Moroccan Information Radio (RIM RADIO). He noted that the speech of HM the King was very clear on the political orientation and conduct of the foreign policy of Morocco in its economic dimension which marks a break from the vague and ambivalent positions regarding the territorial integrity of the Kingdom. The speech reflects the “clarity and ambition” in the foreign policy of the Kingdom not only in the face of enemies, but also vis-à-vis all regional and international partners, he said, adding that Morocco demonstrates an “exemplary” commitment to peace, the principles of international law and international partnership in general. For the expert, the royal speech also reassures Morocco’s position regarding the legality and legitimacy of its rights over its Sahara as it further strengthens the Kingdom’s achievements at the diplomatic level. “Morocco is convinced of the importance of good neighborliness and development of the five Maghreb peoples in the framework of unity and stability,” he said. For his part, Abdelfettah Naoum, professor and political analyst, said that the speech of HM the King was as firm as clear on the issue of the Sahara, stressing that the Moroccanness of the Sahara is not negotiable but the Kingdom aspires to a peaceful settlement to this artificial regional dispute by defeating the obsolete separatist theses. The expert said, in this sense, that the opening of a series of diplomatic representations in the southern provinces enshrines the Moroccan Sahara at a time when the isolation of enemies of the territorial integrity of the Kingdom is increasing, noting that “this intelligent mechanism” represents, rightly, a legal and diplomatic response to hostile parties. Regarding the liberation of the El Guerguerat passage, Naoum refers to a “turning point” especially since Morocco, by ensuring the restoration of free civil and commercial movement, has established itself as an international partner responsible for the protection of trade and the interests of peoples. Abdelhak Snaibi, an expert in security and strategic affairs, noted that with regard to the territorial integrity of the Kingdom, the speech of HM the King was “firm” about the relations of Morocco with its partners. In this context, the royal speech reaffirms that the Sahara issue “is not up for negotiation”, thus sending messages to some parties with common economic interests with Morocco, which are called upon to show “clarity and frankness” in their positions on the Moroccan Sahara issue. He also noted that the speech of HM the King contains “a firm and decisive position” against some parties that try to exploit the issue of the Moroccan Sahara, he said, pointing out that the Sovereign stressed that Morocco will not engage in any economic or commercial action that would exclude the Moroccan Sahara, with those who display vague or ambivalent positions. He concluded that the recognition on the ground of the Moroccanness of the Sahara through the diplomatic representations established in the southern provinces confirms that Morocco is moving forward, with sure steps, to definitively end this conflict at a time when the international community is concerned about the threats to peace and stability in the region.