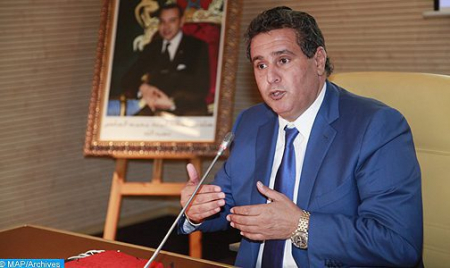 The royal speech delivered on the occasion of the 46th anniversary of the Green March was marked by frankness, clarity, and firmness, said the Head of Government Aziz Akhannouch. In a statement in reaction to the Royal Speech, Akhannouch described a forward-looking speech characterized by a positive spirit. The royal speech has set the record straight on the developments of the issue of the territorial integrity of the Kingdom by reaffirming that the Moroccanness of the Sahara will never be on the agenda of any negotiation and that “if we engage in negotiations, it is essential to achieve a peaceful settlement of this artificial regional conflict,” said the head of government. This process continues to gather support and backing internationally, explained Akhannouch, adding that HM the King in His speech also highlighted the important diplomatic achievements and the sustained development dynamics in the southern provinces. The Sovereign also referred to the development process in the Moroccan Sahara and the achievements of the southern provinces, which had a tangible impact on the daily lives of the population. The Head of Government also said that HM the King stressed the role of international partners who, in all clarity and transparency, invest alongside the national private sector and contribute to the welfare of the population of the Sahara regions, which become henceforth, an open place to development opportunities and a platform for investment. He also highlighted the need to focus on the cues sent by citizens in the southern provinces during the elections of September 8, which resulted in a record turnout in the three regions. According to Akhannouch, it is an answer to the attempts of the enemies of the territorial integrity of the Kingdom, as well as to settle the debate on the legitimate representatives of the citizens of the Saharan provinces. He also asserted that Morocco is a responsible state which respects its international commitments and is committed to peace and diplomatic ways to defend its Sahara. Akhannouch also recalled the sincere wishes of unity and stability, progress and prosperity addressed by HM the King to the peoples of the Maghreb, stressing that this is a strong message affirming Morocco and the Sovereign’s concern to ensure the unity of the peoples of the region and their aspirations for development and progress.