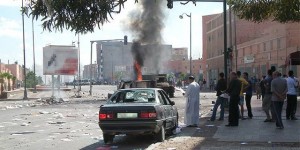 The UN mediator for the Sahara, Christopher Ross, made a trip this weekend to the Moroccan cities of Laayoune and Smara. The Sahrawi separatists seized the opportunity of the visit to play the spoilsport.
Hundreds of young agitators tried, in compliance with the instructions they received from Tindouf, to provoke the Moroccan law enforcement agents and claim to be victim of violence on the part of these agents. They could thus give the UN envoy “evidence” of continued violations of human rights in the disputed territory.
The maneuver was planned and directed by Polisario leaders from their HQ in Rabouni in south-west Algeria.
As the Polisario leaders, who act under the authority of the powerful Algerian military intelligence services (DRS,) do not have any new proposals for the final settlement of the Western Sahara conflict, they try by all means to distort Morocco’s image in matters of human rights.
Following the arrival of Christopher Ross in Western Sahara Friday, Laayoune became an arena of confrontation and clashes between young supporters of separatism and the police. The trouble makers’ provocations were accompanied by acts of sabotage, vandalism and destruction of public and private property.
Clashes resulted in dozens of casualties on both sides. And that was the goal sought by the Polisario strategists to prove to the UN envoy that Moroccan law enforcement agents were still abusing Sahrawi civilians.
Ross has undoubtedly grasped “the inside story” of the Polisario tactics, but according to observers, the UN mediator should look for a solution to the conflict elsewhere than in the Tindouf camps or the Western Sahara.
For these observers, the key to the solution is to be found in the capitals of the two neighboring countries, Morocco and Algeria. Algeria hosts and finances the Saharawi separatist movement while Moroccan authorities have under their control the disputed region.
So the solution of the conflict is not in the hands of the civil society or in the hands of the Polisario Front, whose survival depends on the financial and diplomatic support of the Algerian government.
Christopher Ross should rather target the genuine holders of the solution if he wants to reach quickly a final settlement of the long lasting territorial dispute.