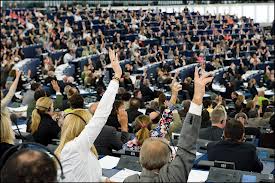 The Algerian media have made a big fuss about the adoption last Tuesday in Strasbourg of the report of MEP Charles Tannock on the situation of human rights in the Sahel.
As usual, most of the Algerian audio-visual, print and electronic media took over the Polisario separatists’ anti-Morocco campaigns. In their comments of the Tannock report, they focused only on the paragraphs that criticize Morocco and purposely ignored the paragraphs denouncing the seriousness of human rights violations in the Polisario-controlled Tindouf camps.
In the report as it was adopted, the European Parliament addresses the extreme poverty prevailing in the Tindouf camps and warns about the risks to see the desperate Sahrawi youths engulf in organized crime and terrorism.
The report also mentions the confusion surrounding the EU humanitarian assistance destined to the camps populations but whose final destination is not always known.
The Algerian media have also failed to mention that the EP discarded a draft amendment calling for the rejection of the EU-Morocco fisheries agreement that is about to be ratified. Also, the Algerian media did not note that the report has not referred to “occupied territories by Morocco” nor to “self-determination,” a jargon recurrently used by Morocco’s critics.
In addition, the report, as adopted by the European Parliament, holds Algeria and the Polisario fully responsible for the obstacles hindering the holding of a census of the Tindouf camps populations, as claimed by the international community and UN agencies.
All these paragraphs have been knowingly censored by the Algerian media which focused essentially on human rights violations in Western Sahara.
The excellent relationship existing between the EU and Morocco has actually aborted the maneuvers of the Kingdom’s critics whether European or Algerian.
And as the saying goes, let the world say what it will. The Algerian hype and propaganda do not prevent Morocco from going its way towards democratization and development.