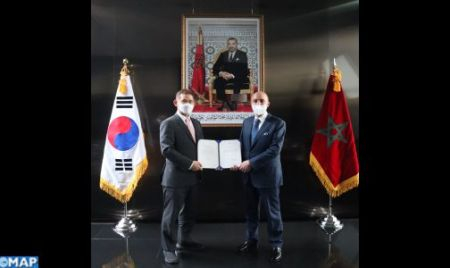 The Embassy of Morocco in South Korea has inaugurated two honorary consulates in this Asian country, one in Daegu and the other in Incheon, respectively on November 5 and 9, in the wake of the commemoration of the 46th anniversary of the glorious Green March. Hyun Chang-Seung has been appointed Honorary Consul of the Kingdom of Morocco in the city of Incheon. He is a prominent South Korean businessman who holds the position of president of Hands Corporation, the largest South Korean investor in Morocco, with an investment of over 470 million dollars. The Korean automotive equipment manufacturer is also among the largest South Korean investors in Africa. In Daegu, Sung Gum-Hwa was appointed Honorary Consul of the Kingdom. Gum-Hwa is a businessman, civil society actor and chairman of the Moroccan-Korean Association. During the opening ceremonies of the two honorary consulates, the Moroccan ambassador to South Korea, Chafik Rachadi, stressed the importance of these two inaugurations coinciding with the celebration of the anniversary of the glorious Green March, which enjoys a special place in the hearts of all Moroccans, as a symbol of the perfect symbiosis between the Glorious Alaouite Throne and the People for the completion of the territorial integrity of the Kingdom. The Moroccan diplomat also highlighted the importance of the opening of two honorary consulates of Morocco in South Korea, an indication of the constant development of relations between the two countries since the establishment of bilateral diplomatic relations in 1962, as well as the willingness to promote rapprochement between the various political and economic actors and to consolidate the ties of friendship and cooperation between the two countries.