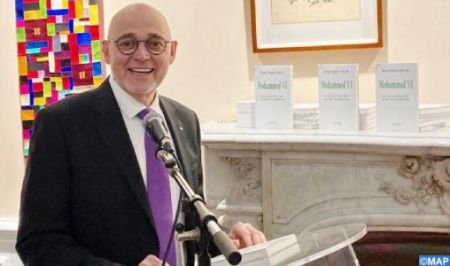 The book “Mohammed VI, the vision of a King: actions and ambitions”, by the French-Swiss academic, Jean-Marie Heydt, was presented recently at a conference-debate on “Morocco, a regional hub for a Europe-Africa partnership”, co-organized by the House of Europe and the Consulate General of the Kingdom of Morocco in Montpellier. In his speech at the House of International Relations in Montpellier, in the presence of a diverse audience of researchers, journalists, political actors and members of the Moroccan community residing in Montpellier and the region, Jean-Marie Heydt reviewed the reforms undertaken under the reign of His Majesty King Mohammed VI, as well as the dynamics of change in the Kingdom in various political, economic and social areas, placing the human being at the heart of the priorities. “I am only a modest observer who is obliged to see on the ground the interaction between speeches and actions,” said Jean Marie Heydt. For the French-Swiss academic, also an international expert and former president of the North-South Center of the Council of Europe, “the new development model, a strategy of soft power, desired by His Majesty the King takes strongly into account the social dimension so that Moroccan men and women are really the beneficiaries of reforms”. On this occasion, he provided an analyzis of the uniqueness of African partnerships in the light of “the royal vision which is characterized by the fact of being global and plural. “Global in the sense that all areas can find their place, insofar as they will adapt to each country concerned according to its specificity”.