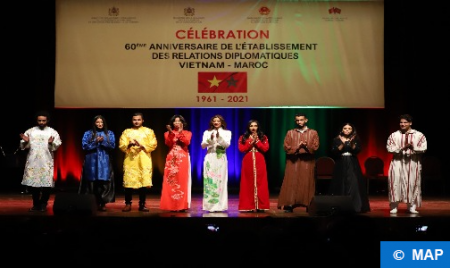 A ceremony was held Friday at the Mohammed V National Theater in Rabat to celebrate the 60th anniversary of the establishment of diplomatic ties between Morocco and Vietnam, in the presence of several accredited ambassadors to Rabat and a host of political figures. In a speech on this occasion, the High Commissioner for Veterans and former members of the Liberation Army, President of the Moroccan-Vietnamese Friendship Association, Mustapha El Ktiri, recalled that “the history of human relations between Moroccans and Vietnamese goes back to the famous Indochina War (1946-1954).” During this war, “hundreds of thousands of young Moroccan soldiers were enlisted in the French expeditionary corps, under the circumstances of the colonial occupation of Morocco and Vietnam,” he explained, adding that “some of these Moroccan soldiers deserted the French colonial forces to join the Vietnamese movement.” “Between the Kingdom of Morocco and the Socialist Republic of Vietnam, a whole fund of historical accumulation has been forged, constituting a historical heritage that is shared between the two countries and the two peoples,” he added. For her part, the ambassador of the Socialist Republic of Vietnam, Dang Thi Thu Ha, stressed that over the past six decades, “the two countries have built close relations, but the ties between Vietnam and Morocco do not only date back to 1961, they are much more historical,” pointing out that “many Moroccan soldiers have fought alongside the Viet Minh, the Vietnamese army at the time”. These Moroccan soldiers have left their mark in Vietnam, through the construction of the “Morocco Gate”, which is a monument steeped in Moroccan culture, she added, while stressing that “these veterans and their families represent a living and vivid proof of the shared history between the two countries.” The diplomat then announced that the Vietnamese Embassy in Morocco has launched the construction of the Vietnamese Gate, in the village Douar Sfari, in the province of Kenitra, following the example of the Moroccan Gate in Ba Vi. She also stressed that her country plays “the role of a bridge between Morocco and ASEAN [the Association of Southeast Asian Nations],” while specifying that “Morocco is currently one of the few Arab and African countries that maintain close relations with this organization.” On his turn, the Secretary General of the Ministry of Youth, Culture and Communication, Abdelilah Afifi, said that the distinguished relations between Morocco and Vietnam are based on a common historical memory, noting that the common cultural heritage and close human ties that unite the two countries are witnesses. In this regard, he stressed that the “Morocco Gate”, built between 1956 and 1960 in the north of the capital Hanoi, presents one of the heritage monuments dedicated to the Arab-Islamic architectural style, adding that the Moroccan-Vietnamese families who settled in Vietnam or those who chose to return to Morocco, at the initiative of the late HM King Hassan II, is a strong embodiment of these common values. The ceremony to commemorate the 60th anniversary of the establishment of diplomatic relations between Morocco and Vietnam was organized in cooperation between the Ministry of Foreign Affairs, African Cooperation and Moroccans Abroad, the Ministry of Youth, Culture and Communication, the Embassy of the Socialist Republic of Vietnam in Morocco and the Morocco-Vietnam Friendship Association.