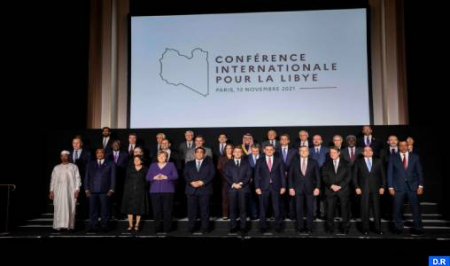 Participants in the Paris International Conference on Libya stressed the need to hold, on December 24, presidential and parliamentary elections to allow Libyans to freely choose their president and representatives. During this Summit, co-hosted on Friday by France, Italy, Germany and Libya, the international community considered it essential that the results of these elections be accepted by all stakeholders. This international call for the holding of these elections on the date agreed upon in the Libyan political roadmap was clearly expressed by Morocco’s Nasser Bourita, minister of Foreign Affairs, African Cooperation and Moroccans Abroad, who represented His Majesty King Mohammed VI at the Summit. Only the elections can transform the ceasefire into lasting peace, definitively settle the issue of legitimacy and end the duality of institutions in Libya, stressed Bourita, who emphasized the primacy of the sole interest of the Libyan people. In this context, the process of reunification of Libya’s sovereign institutions, which was launched in Morocco’s Bouznika, was welcomed in the Final Declaration of the Paris International Conference on Libya, which also insisted on the respect of the results of the Geneva political dialogue on the Libyan issue. Elections will strengthen the sovereignty of a united Libya and enable the legitimate government to address the fundamental issues of security and stability, as well as establish sound relations with foreign partners. These elections will also allow the international community to have a single interlocutor that is Libya, said Bourita, noting that “there is no guarantee for these elections to be held later if not on the date agreed upon.”