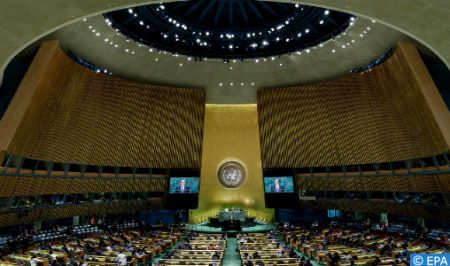 The Kingdom of Morocco was re-elected, in the person of Professor Hassan Ouazzani Chahdi, to the International Law Commission for the period 2023-2027, during the 76th session of the United Nations General Assembly held Friday in New York. The elections were particularly competitive, with twelve candidates for nine seats allocated to African states, said the Ministry of Foreign Affairs, African Cooperation, and Moroccans Abroad in a statement, adding that thanks to the mobilization for two years of the entire Moroccan diplomatic apparatus for the success of this candidacy, it has received 151 votes, ensuring its election in the first round. This new success testifies to the high credibility the Kingdom’s multilateral diplomacy enjoys, thanks to the High Vision of His Majesty King Mohammed VI, whose key pillar is the commitment to international law, and His action for the progressive development of international law. It is also a recognition of the ambitious strategy that the Kingdom is implementing, on High Royal Instructions, to strengthen its presence in international organizations, added the statement.