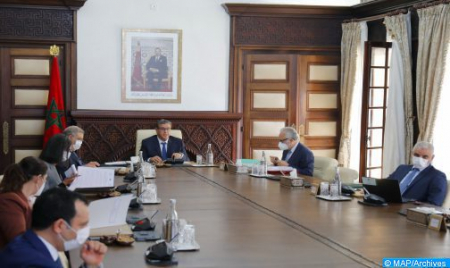 The Head of Government Aziz Akhannouch will chair on Wednesday a Government Council. Delegate-Minister to the Minister of Economy and Finance, in charge of the Budget, will present development on the establishment of the generalization of social protection, said a statement from the department of the Head of Government. The Council will examine six draft decrees, the first of which relates to the implementation of the law on the basic scheme of compulsory health insurance and the law establishing a pension scheme for professionals, self-employed and non-salaried persons engaged in private activity, while the second completes the annex of the decree adopted for the implementation of the two aforementioned laws. The third draft decree is related to the application of these two laws and the application of Article 73 of the General Tax Code applicable to the self-employed, added the statement. The fourth and fifth decrees concern the application of the two laws mentioned with regard to persons subject to the single professional contribution regime, traders, and craftsmen keeping accounts. The Council will conclude its proceedings by reviewing a sixth draft decree on the establishment of a Ministerial Commission to oversee the reform of the social protection system.