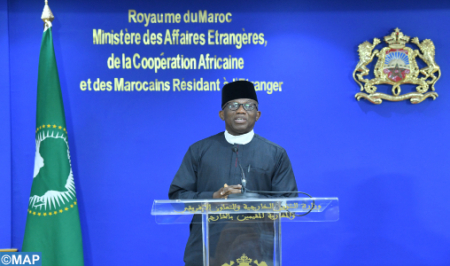 The African Union (AU) Commissioner for Political Affairs, Peace and Security, Bankole Adeoye hailed, Tuesday in Rabat, the decisive role played by Morocco in supporting the reform initiatives of the Commission. During a press briefing following his meeting with Minister of Foreign Affairs, African Cooperation and Moroccans Abroad, Nasser Bourita, the African official highlighted the importance of the major role played by Morocco in achieving effective and efficient governance for more stability and security in the continent. He also recalled that during the last 6 months, the Commission has been working on the implementation of its new organizational chart, with the active participation of Morocco after its return to the African Union. The Commission has adopted a strategic vision based on appropriate mechanisms to achieve purely African solutions, he added. Referring to the recent elections held in Morocco, Adeoye emphasized the support provided by the Kingdom through the sharing of its experience and expertise with other African countries, in order to strengthen the capacity of African actors in this area and the consolidation of democracy on the continent. The AU Commissioner for Political Affairs, Peace and Security also stressed the importance of lasting peace and stability in Africa, pleading, in this sense, for close cooperation between African States to prevent conflicts and meet the new challenges related to the phenomena of terrorism and extremism.