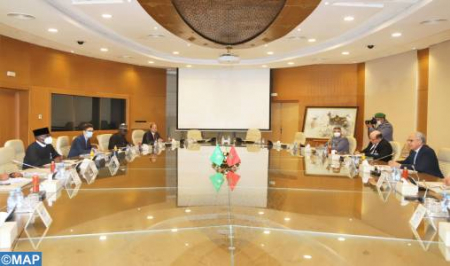 Pursuant to the High Royal Instructions, Minister Delegate to the Head of Government in charge of National Defense Administration, Abdeltif Loudyi, received Tuesday, the Commissioner of the African Union (AU) for Political Affairs, Peace and Security, Bankole Adeoye. During this meeting, the two parties discussed several questions related to peace and security of the African continent, the humanitarian actions deployed by Morocco for the benefit of several member countries of the African Union, said a statement from the National Defense Administration. These include the participation of the Royal Armed Forces in peacekeeping operations under the auspices of the United Nations and the proven humanitarian dimension of Morocco’s foreign policy, particularly the deployment of several military medical-surgical hospitals in several African countries, noted the statement. On this occasion, Adeoye highlighted the key role played by the Kingdom of Morocco under the leadership of His Majesty King Mohammed VI, as an actor of stability and peace for the African continent. He commended the Royal solidarity-based Initiative, which consists in delivering medical aid to several African countries during the Covid-19 pandemic, added the statement. He stressed the multidimensional strategy under the leadership of His Majesty the King, to address the threats and security challenges of the region focusing on South-South cooperation, the launch of regional integrative projects, and the progressive sustainable development of the African continent. The two officials reiterated their common willingness to work for the consolidation of cooperation and partnership between the Kingdom of Morocco and the African Union, concluded the statement.