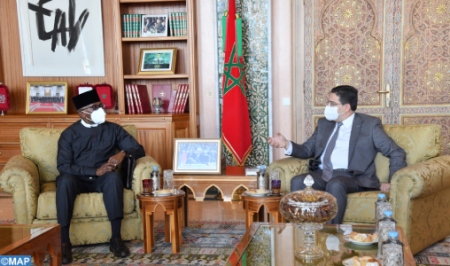 The Minister of Foreign Affairs, African Cooperation and Moroccans Abroad, Nasser Bourita, held talks, on Tuesday in Rabat, with the Commissioner of the African Union (AU) for Political Affairs, Peace and Security, Bankole Adeoye. These talks focused on peace and security in the African continent, reforms and initiatives carried out by the AU, as well as the major role of Morocco within the Pan-African Organization and the sharing of its experience and expertise, particularly with regard to elections. On this occasion, particular emphasis was placed on the significant role of Morocco in stability and security in Africa, as well as the importance of reforming the Peace and Security Council (PSC). In a statement to the press after the meeting, Bourita said he had discussed with Adeoye the pillars adopted by the Commission to carry out its reform. These namely include governance, African diplomacy, peace and stability, which are considered necessary for stability in Africa, in addition to Morocco’s support to these initiatives, as well as in terms of electoral observation, preventive diplomacy and crisis management. For his part, the AU Commissioner for Political Affairs, Peace and Security stressed the importance of Morocco’s leading role in good governance, stability and security in the continent. During the last 6 months, the Commission has been involved in the implementation of its new organizational chart, with the active participation of Morocco after its return to the AU, Adeoye added.