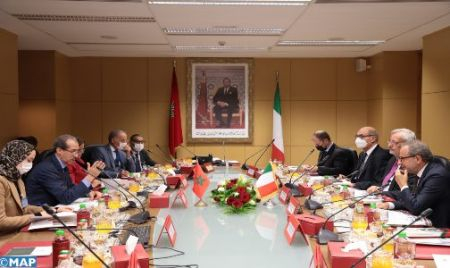 Public prosecutor at the Court of Cassation, president of the public prosecutor’s office, El Hassan Daki, reviewed, Tuesday in Rabat, the judicial cooperation relations between Morocco and Italy with a delegation led by Giovanni Salvi, public prosecutor at the Court of Cassation. The talks between the two parties focused on the prospects for collaboration between the prosecutors of the two countries in the field of combating organized and cross-border crime and terrorism. They also discussed ways to strengthen judicial cooperation through a memorandum of understanding framing the coordination on these issues, the exchange of expertise, experience and information, as well as the sharing of best practices in areas of common interest. This visit inaugurates a new stage of judicial cooperation between the two countries, in order to face common challenges in the fight against terrorism and organized crime, said Daki, in a statement to MAP. “We are working to activate international cooperation to ensure that justice prevails, curb security threats and end impunity for cross-border crime,” he said. The “historic and solid” relations between Morocco and Italy “need to be developed and strengthened, so as to best serve the interests of both countries in the field of justice reform in a comprehensive manner,” said Daki. The public prosecutor at the Italian Court of Cassation praised the Moroccan experience in the field of the independence of Justice, particularly the public prosecutor’s office and the missions for which it is responsible. Morocco has undertaken a set of major changes for the reform of the judicial system in recent years, especially in terms of training programs for judges, recalled Salvi in a similar statement. He said that his country is considering, in turn, the achievement of a set of reforms in the justice sector, especially in light of “legal loopholes” revealed by the health crisis related to the Covid-19 pandemic.