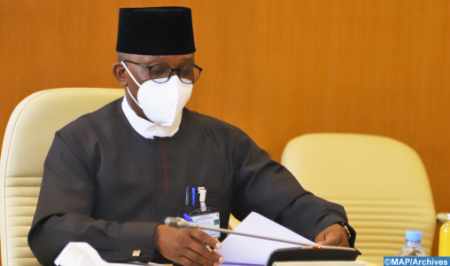 Upon the High Instructions of His Majesty the King, Supreme Commander and Chief of General Staff of the Royal Armed Forces (FAR), the Lieutenant General, FAR Inspector General and Commander of the Southern Zone, on Wednesday received at the FAR General Staff in Rabat the African Union’s Commissioner for Political Affairs, Peace and Security, Mr. Bankole Adeoye, who was accompanied by a large delegation. “Talks between the two officials focused on the contribution of the Royal Armed Forces in the various UN-led peacekeeping operations conducted on the continent since the sixties as well as humanitarian actions, including the deployment of military and medico-surgical hospitals”, says a statement issued by the FAR General Staff. The two officials also discussed issues of common interest relating in particular to the FAR expertise in terms of peacekeeping, training and the contribution of the Royal Armed Forces to the continental logistics base of the African Union in Douala, Cameroon, the statement adds. The two sides welcomed the role played by Morocco under the leadership of His Majesty the King, Supreme Commander and Chief of the FAR General Staff, in promoting peace, stability and security in Africa. This visit took place in the presence of the ambassador Mohamed Arrouchi, Permanent Representative of the Kingdom to the African Union and of the Military, Naval and Air Attaché to the embassy of the Kingdom of Morocco in Addis Ababa and Military Adviser to the Permanent Mission to the African Union.