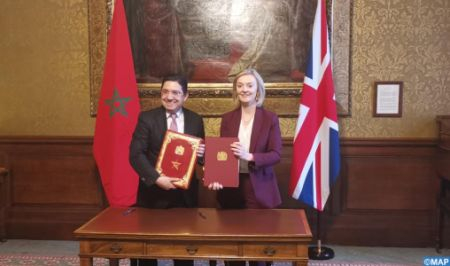 The United Kingdom on Wednesday hailed Morocco’s contribution to regional and international counter-terrorism efforts, praising the creation of the UN Office of Counter-Terrorism in Rabat. In a joint statement at the end of the 3rd session of the Morocco-UK strategic dialogue, the two countries called for resolute international action to combat terrorism and violent extremism in all its forms, and reaffirmed their support for the United Nations global counter-terrorism strategy. UK Foreign Secretary Liz Truss and Morocco’s Minister of Foreign Affairs, African Cooperation and Moroccans Abroad, Nasser Bourita, expressed their “deep concern” about the evolving terrorist threat in Africa, particularly in the Sahel. In addition, the two countries discussed their cooperation in the fight against international crime, noting that thanks to UK support, training and technology, Morocco’s six regional airports are now better equipped to fight drug trafficking, which led to the detection of more than 240 drug traffickers last year. This cooperation also extends to the maritime domain and will facilitate joint security standards for a new direct ferry service between Tangier Med and Poole (southern England), the same source notes.