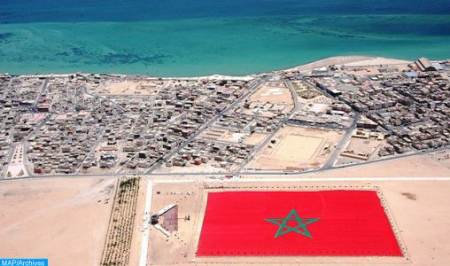 Algeria is “entirely responsible” for the creation and continuation of the artificial regional conflict over the Moroccan Sahara, says the Panamanian newspaper “La Verdad Panamá”. In an article published recently, the publication underlines that several international experts insisted, during a virtual meeting organized by the Coalition for the autonomy of the Sahara (AUSACO), on the “full and confirmed” responsibility of Algeria in this dispute. They also highlighted the relevance and preeminence of the Moroccan autonomy proposal as the “only” possible solution to this regional conflict under the sovereignty and territorial integrity of the Kingdom. During this meeting, these experts noted that since the creation of the “polisario “, the Algerian regime “has never ceased” to provide military, political, diplomatic, logistical and financial support to the separatist militia. Speaking on this occasion, Ricardo Sanchez Sierra, Deputy-president of the Federation of Peruvian Journalists, stressed the “full and confirmed” responsibility of Algeria in this conflict, while denouncing its “expansionist inclinations” through the creation of a “puppet republic” in the southern provinces of Morocco. According to the newspaper, Sanchez criticized Algiers’ “futile attempts” to undermine the territorial integrity of Morocco, adding that Algeria “ceded part of its territory in Tindouf to the criminal organization of polisario to use it as a base against the Kingdom and thus serve its separatist agenda”. The speaker, in this regard, urged the international community to include the “polisario” in the list of terrorist organizations, noting that its leader, the so-called Brahim Ghali, is the subject of a series of trials for violation of human rights and crimes against humanity. For his part, the Mexican expert in international development, Pedro Diaz de la Vega, highlighted the massive participation of the inhabitants of the Moroccan Sahara in the triple election of last September, noting that these populations fully enjoy their rights in their country. In his turn, the Spanish expert in Maghreb affairs, Rafael Esparza Machin, deemed the autonomy initiative presented by Morocco in 2007 as “unique” solution to the artificial conflict over the Moroccan Sahara within the framework of the sovereignty and territorial integrity of the Kingdom. “La Verdad Panamá” underlines that this meeting, moderated by the president of the Association “Alter Forum”, Bachir Dkhil, former founding member of the “polisario”, was marked by the testimony of Hmada El Bihi, president of the Sahara League for Democracy and Human Rights, on his experience of kidnapping by “Polisario” militias and the sufferings he endured in the Tindouf camps.