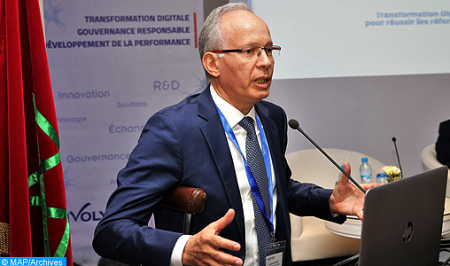 Morocco’s experience and efforts in the fight against corruption were highlighted, Tuesday in Sharm El-Sheikh, during the 9th session of the Conference of the States Parties to the United Nations Convention against Corruption. Speaking, by videoconference, during the second day of the five-day Conference, the president of the National Authority for Probity, Prevention and the Fight against Corruption (INPPLC), Mohamed Bachir Rachdi, underlined Morocco’s effective engagement in the international dynamic of the fight against corruption. This commitment, he said, is reflected in the support of efforts aimed at the implementation and application of the provisions of the UN convention, through the active participation of the Kingdom in all sessions of the Conference, as well as the organization of the 4th session, which was marked by the adoption of the “Marrakech Declaration for the fight against corruption”. In this regard, Mr. Rachdi stressed that Morocco has undertaken several measures that have led to many legal and institutional achievements since the revision of the constitution in 2011, citing in particular the independence of the public prosecutor, the creation of the general inspection of the judiciary and the strengthening of the roles of governance bodies. The official also focused on the National Anti-Corruption Strategy (2016-2025), which was developed and implemented using a participatory approach, noting that it has been strengthened and restructured following an objective assessment, so that it includes, from 2022, a set of priorities relating in particular to digital transformation, control, public orders and the integrity of the private sector. In addition, the law relating to the INPPLC was promulgated, he said, explaining that the Authority is an independent constitutional institution endowed with broad prerogatives, in terms of defining the strategic orientations of national policy in the matter and the guarantee of their implementation, as well as inquiries and investigations in the cases of corruption. These policies were reinforced after the approval by His Majesty King Mohammed VI of the new development model, which is based on the principles of complementarity between a strong State and a strong Society, the primacy of the general interest and the strengthening of values of ethics and integrity, Mr. Rachdi pointed out. The convening of this conference coincides with the commemoration of the 10th anniversary of the Marrakesh Declaration, he said, adding that it is an opportunity to reaffirm the international commitment to the priority given to the fight against corruption, given its role in drying out sources of corruption and developing individual and collective behavior. Morocco hopes that the work of this session will lead to the adoption of the draft resolution that it will present on the subject of the fight against corruption, said Rachdi, adding that the said project will open new prospects for the Marrakech Declaration, in particular with regard to the adequacy of national strategies for crisis situations and the establishment of the fight against corruption as a pillar of the inclusive and sustainable development plan. This session is held in specific circumstances, marked by the spread of the Covid-19 pandemic and its repercussions on the management of public affairs and the risks of the appearance of new sources of corruption, he stressed, noting that the effects of the pandemic may compromise anti-corruption efforts, in view of the challenges that control bodies and judicial authorities are expected to encounter in the fight against corruption. This conference is the largest global event for discussing issues related to corruption and is a key meeting place for collective reflection, he said, adding that participants are called upon to develop a concrete vision to open new prospects for the different countries so that they develop their national policies and programs, and this through an approach integrating the specificities and needs of the management of exceptional conditions. The Ninth session of the Conference of the States Parties to the United Nations Convention against Corruption opened Monday in Sharm El-Sheikh, Egypt, with the participation of Morocco. This five-day meeting, which takes place in a hybrid format, brings together around 2,700 participants, including heads of state and government, representatives of regional and civil society organizations, academics, researchers and representatives of the private sector. Morocco is represented at this conference by a delegation which includes in particular the ambassador and Permanent Representative of Morocco in Vienna, Azzeddine Farhane, the President of the National Authority for Integrity, Prevention and the Fight against Corruption (INPPLC), Mohamed Bachir Rachdi, and the deputy to the Moroccan ambassador in Cairo, Abderrazak Dinar. The participants will discuss the means to strengthen the fight against corruption, as well as issues related to prevention, asset recovery and international cooperation.