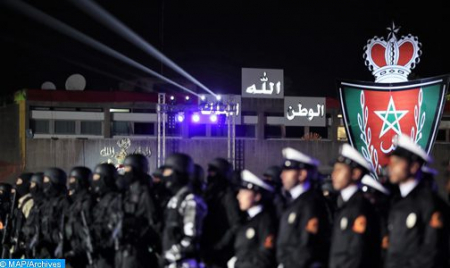 The General Directorate of National Security (DGSN) has underlined that it seeks to initiate, next year, the implementation of several structural projects and in the short and medium term, in addition to the security achievements and the execution of structuring projects in the police field, despite the exceptional health circumstances due to the persistence of the Covid-19 pandemic. In its report for the year 2021, the DGSN said that these projects will have a positive impact on issues related to public security, noting that it intends to work towards the generalization of anti-gang brigades (BAG) at the level of the other regional services of the Judicial Police, and to create new brigades to fight against explosives in the cities of Rabat, Fez, Dakhla, Beni-Mellal and Agadir, thanks to the successful experience and positive results obtained by the brigades set up in the cities of Laayoune, Casablanca, Marrakech and Oujda. According to the DSGN, two regional police training schools will be set-up next year in Casablanca and Marrakech, in addition to those already open in Fez, Oujda, Laayoune, Kenitra, Tangier and Bouknadel and which are part of the Directorate’s plan to set up a national network of training schools distributed in a balanced manner at the national level, with the aim of bringing police training centers closer to candidates in the different regions of the Kingdom. Preparations are also underway to create new mobile law enforcement brigades, with the aim of supporting and developing operations linked to Morocco’s hosting of international events. In terms of strengthening the equipment and material made available to the national security services, it is planned to equip and renew the vehicle fleet with cynotechnical teams, and brigades specializing in the fight against crime and criminal investigation and investigations which fall under the recently established judicial police, as well as the public security services, in particular the police and the mixed brigades in charge for securing the perimeters of educational establishments. Regarding the improvement of security services, the DGSN is currently planning the execution of a digital transition strategy to encompass various administrative services intended for citizens, and which consists of the adoption of an open and secure IT mechanism that allows the filing and processing of the procedure for obtaining administrative documents online, by exploiting the remote identification capabilities offered by the new generation of the electronic identity card, in addition to providing a remote complaint service as an advanced stage of the electronic services that the DGSN plans to implement over the next year. According to the DSGN, the presentation of the main outlines and main aspects of its report for the year 2021 is a consecration of its communication approach deployed over the past six years, aimed at highlighting the efforts made to ensure the safety of citizens, as well as the achievements made in terms of modernizing security services and structures and the mechanisms adopted to establish good governance in the management of human and financial resources, in addition to supporting planned projects in the field of security public for the coming year.