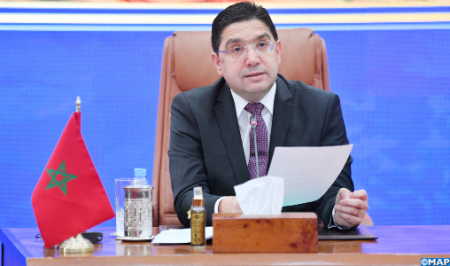 The commemoration of the 1st anniversary of the Morocco-US-Israel Joint Trilateral Declaration is not a celebration of a mere diplomatic event, it is a rather a celebration of a shared past, present and future, said Wednesday the minister of Foreign Affairs, African Cooperation and Moroccans Abroad, Nasser Bourita. It is a renewal of a promise at three levels, namely a genuine commitment to People; a concrete building of Partnership and an active engagement for Peace, the minister pointed out during a videoconference held on this occasion, with the participation of the Israeli Minister of Foreign Affairs, Yaïr Lapid, U.S. Secretary of State Antony Blinken and the Chargé d’Affaires of the United States embassy in Morocco, David Greene. The signing, last year, of the Joint Trilateral Declaration before His Majesty King Mohammed VI “was a trigger in bringing our nations even closer,” said Bourita, adding that it is also a trigger for strengthening the long-standing bonds that have always existed between our people. Highlighting the Jewish component of the centuries-old Moroccan identity, the minister stressed that in order for this Declaration to be meaningful, People should remain at the very beginning and at the receiving end of this partnership. “We could consider that we have succeeded, when the one million Israelis of Moroccan origins can renew with their heritage and visit the land where their ancestors have lived in peace and harmony, under the protection of the Moroccan Monarchs,” he said. By asserting the recognition of Morocco’s sovereignty over its Sahara, as well as by reactivating the relationship with the State of Israel, the Joint Trilateral Declaration carries a very high message of peace, he pointed out. The Joint Trilateral Declaration is a valuable tool that can help move forward the cause of peace in the region, improve security and unlock new opportunities for all, Bourita stressed. Morocco, as a historic bridge-builder and credible actor of peace and stability, is firmly committed to help achieving a lasting peace in the region, he said. “Under the Guidance of His Majesty King Mohammed VI, the Kingdom will continue its endeavor in supporting a just, lasting and equitable peace based on the two-state solution: the State of Israël, and an independent Palestinian state within the borders of June 4, 1967, both living side by side in peace and security,” the minister underlined. Moreover, as Chairman of the Al Quds Committee, His Majesty King Mohammed VI is calling for the preservation of the “unique and sacred character of Al-Quds Acharif, and its spiritual significance and special vocation as a city of peace,” he recalled. The Trilateral Declaration confirms and amplifies the vast potential for cooperation, not only between the three countries, but also by moving towards trilateral partnerships open to other countries and regions, Bourita noted. In line with the Royal Vision, “we are keen to have a Partnership of action: one that is on the move, on a clear path for concrete and win-win cooperation. A partnership that touches on all areas: health, education, security, economy, trade and investment, tourism, culture, agriculture, climate change and sustainable development,” the minister stressed. The minister underlined that Morocco has implemented the commitments made in the declaration, saying that diplomatic missions are up and running; agreements have been signed; official visits have been exchanged; and, sectoral cooperation is on the right track.