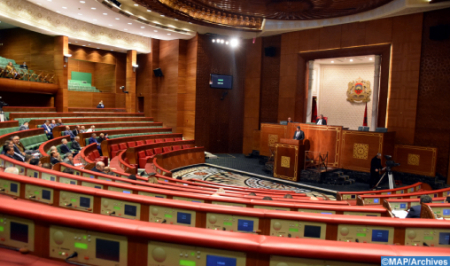 The House of Advisors on Tuesday adopted, unanimously, during a plenary session, the draft law n°43.21 amending and supplementing the Dahir n°1.93.228 of September 10, 1993 establishing the Sheikh Zayed bin Sultan Foundation and the draft law n°44.21 amending and supplementing the law n°12.07 establishing the Sheikh Khalifa Ibn Zaïd Foundation. These two establishments constitute pillars of the national health system, notably in the framework of the generalization of social protection that HM King Mohammed VI surrounds with His High Solicitude, through high level health services in different specialties and university training in the field of health sciences in general, in addition to their contribution to the development of medical scientific research and cooperation with the Ministry of Health, the University Hospitals (CHU) and professional bodies in all fields, social in particular. Given the need to revise the legal framework of the Sheikh Zaïd Ibn Soltan Foundation and the Sheikh Khalifa Ibn Zaïd Foundation so that they can fully play their role as an essential link in the national health system, these two bills have been planned to rethink the missions of these two institutions, as well as their internal administration and governance so as to be flexible in management and quick in decision making, while opening up to new areas of health.