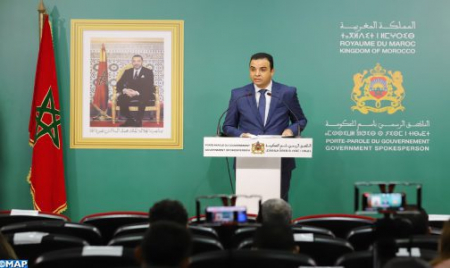 The Council of Government, convened on Thursday in Rabat under the chairmanship of the Head of Government, Aziz Akhannouch, approved the Convention on the protection of workers against occupational hazards due to air pollution, noise and vibration in the workplace, as well as the draft law on its approval. This was presented by the Minister of Economic Inclusion, Small Business, Employment and Skills, Younes Sekkouri, on behalf of the Minister of Foreign Affairs, African Cooperation and Moroccans Abroad, Nasser Bourita. Convention 148 had been adopted by the General Conference of the International Labour Organization (ILO) at its 63rd session held on June 20, 1977 in Geneva, said the Minister Delegate for Relations with Parliament, Government Spokesman Mustapha Baitas, in a statement read out at a press briefing after the Council. The Council also approved the draft law No. 92.21 approving the above-mentioned convention, he added. This Convention aims to provide an appropriate working environment for employees, in accordance with the standards of occupational safety, by protecting them from risks due to air pollution, noise and vibration in the workplace. In the absence of an equivalent to the provisions on protection against vibration in national legislation, it was decided to attach a note excluding these provisions of the Convention, in accordance with Article 2 which states that each Member State reserves the right to accept the obligations provided for in this Convention separately, concluded Baitas.