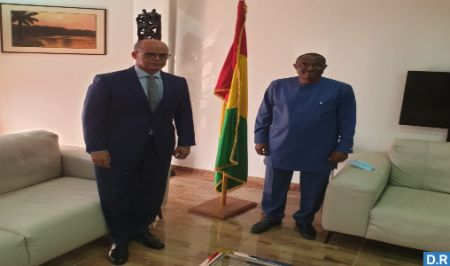 Prime Minister, Head of the transitional government of the Republic of Guinea, Mohamed Beavogui, received, Thursday in Conakry, HM the King’s ambassador, Driss Isbayene at the end of his mission in this country. On this occasion, the Moroccan diplomat thanked the Prime Minister and the Guinean people, who helped him to succeed perfectly his mission. He also recalled the exemplary and exceptional ties between the two countries, which date back to the independence of Guinea, noting that these relations have been consolidated over the years, by strengthening cooperation in several areas. For his part, the Guinean official took this opportunity to pay special tribute to His Majesty King Mohammed VI for all that the Sovereign has done and continues to do for Guinea, expressing to Isbayene the gratitude of his country for the diplomatic action he has conducted throughout his mission in Guinea. Beavogui also emphasized the centuries-old and fraternal relations between Morocco and Guinea, which are based on a solid foundation that is training, including the significant increase in the quota of scholarships granted by the Kingdom to Guinean students wishing to pursue their studies in higher education institutions in Morocco, which is considered an essential lever for any development. For his part, the head of Guinean diplomacy, Morissanda Kouyate, praised during an audience granted Tuesday to Isbayene, the tireless action undertaken by HM the King for the benefit of Guinea and other countries on the African continent, as part of an efficient and fruitful South-South cooperation. “Guinea and Morocco are linked by several cooperation agreements covering virtually all areas,” he said, while stressing the particularity of relations between the two countries and especially the efforts made by the Moroccan diplomat to promote these very special relations. The Head of Guinean diplomacy assured that he will spare no effort and do everything to further strengthen cooperation relations between the two countries because, he stressed, “Morocco does much for Guinea and remains a privileged partner”.