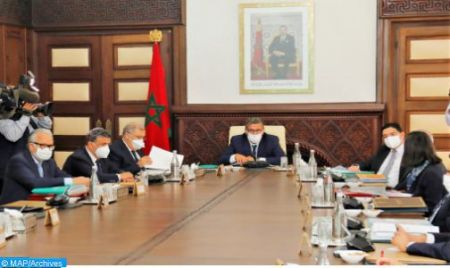 A government council will meet next Thursday under the chairmanship of the head of government, Aziz Akhannouch. At the beginning of its proceedings, the council will hear a presentation by the Minister of Equipment and Water on the water policy: achievements and prospects, said a statement by the department of the head of government. The Council will then examine four draft decrees, the first of which will amend and supplement the decree on the powers and organization of the Ministry of Economy and Finance. The second draft decree relates to the powers and organization of the Ministry of Equipment and Water, while the third relates to the powers and organization of the Ministry of Investment, Convergence and Evaluation of Public Policies, added the same source. The fourth draft decree amends and supplements the two decrees on the special status of the interdepartmental corps of technical assistants and administrative assistants. The Council will also consider a convention on the protection of workers’ claims in the event of the insolvency of their employer, adopted on 23 June 1992 in Geneva, during the 79th session of the General Conference of the International Labour Organization (ILO), as well as a draft law approving the said convention. It will complete its proceedings by considering proposals for appointment to high office, in accordance with the provisions of Article 92 of the Constitution, concluded the statement.