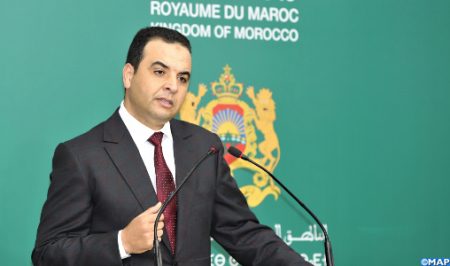 The Moroccan government welcomed “with great satisfaction” the positive content of German President’s message to HM King Mohammed VI on the occasion of the New Year, the Minister Delegate in charge of Relations with Parliament, Government Spokesman, Mustapha Baitas, said on Thursday. “The government welcomed with great satisfaction the positive and important statements expressed by the German government, and the content of the message sent by the German President to His Majesty King Mohammed VI,” said Baitas during a press briefing held at the end of the Council of Government, which met Thursday under the chairmanship of the Head of Government, Aziz Akhannouch. In a message sent to HM the King on the occasion of the New Year, the President of the Federal Republic of Germany, Frank-Walter Steinmer, stressed that his country “welcomes” the vast reforms undertaken under the leadership of His Majesty King Mohammed VI. The German Head of State underlined that his country “considers the autonomy plan presented in 2007 as a serious and credible effort by Morocco and as a good basis to reach an agreement” to the regional dispute over the Sahara. “My country and I are very grateful to You for Your active commitment to the peace process in Libya,” said the German President in his message to HM the King. The Ministry of Foreign Affairs, African Cooperation and Moroccans Abroad said in a statement that it appreciates the positive announcements and constructive positions taken recently by the new German federal government, adding that these announcements allow to consider a revival of bilateral cooperation and the return to normal work of diplomatic representations of the two countries in Rabat and Berlin.