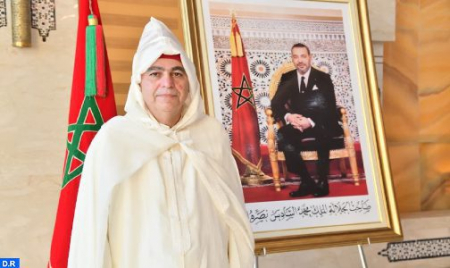 Kuwait’s Foreign Minister and Minister of State for Cabinet Affairs, Sheikh Ahmed Nasser Al-Mohammad Al-Sabah, received Thursday the new Moroccan ambassador to Kuwait, Mr. Ali Benaissa, who presented to him a copy of his credentials. During this meeting, the Kuwaiti minister reaffirmed his country’s unwavering position in support of the territorial integrity of the Kingdom within the various regional and international bodies. On this occasion, the Kuwaiti top diplomat expressed his wishes of success to the Moroccan ambassador in his function, as well as more development and prosperity to the distinguished relations that link the two countries. The Minister also praised the relations between His Majesty King Mohammed VI and his brother His Highness Sheikh Nawaf Al-Ahmad Al-Jaber Al-Sabah, Emir of the State of Kuwait, as well as the fruitful and constructive cooperation between the two countries. In addition, he expressed his aspiration to build this cooperation within the framework of a defined action plan covering all economic, sectoral, social and cultural fields, stressing the need to mutually benefit from the experiences of both countries in several areas of strategic development. For his part, the Moroccan diplomat highlighted the distinguished level of relations between the two countries, stressing the Kingdom’s consideration towards the noble and constant positions of the State of Kuwait in favor of Morocco’s territorial integrity.