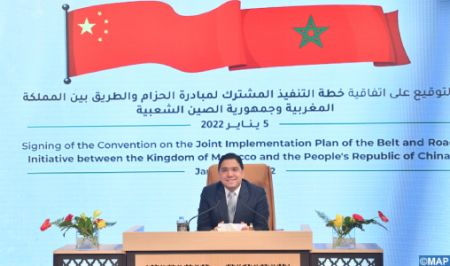 The “Joint Belt and Road Implementation Plan” between the Kingdom of Morocco and the People’s Republic of China is a comprehensive tool for strengthening the bilateral partnership, said Wednesday, Minister of Foreign Affairs, African Cooperation and Moroccans Abroad, Nasser Bourita. This Plan sets-up a well-thought-out framework, with clear principles and sound mechanisms, and it provides a comprehensive tool for strategic management and concrete deployment of a full-scope partnership, ranging from political dialogue, to across-the-board sectorial cooperation, said Bourita in an address at the signing ceremony of the agreement on the Plan, held by video conference. This cooperation, called upon to move to a higher level of structured engagement, includes infrastructure, trade, investment, industry, agriculture, fisheries, energy, finance, education, science, technology, green development and health, recalled the Minister, noting that this ceremony is an opportunity to echo the place of China in the kingdom’s diplomatic priorities. In this regard, he stressed that Morocco and China, under the leadership of His Majesty King Mohammed VI and the President of the People’s Republic of China, H.E. Mr. Xi JINPING, have entered a new era in their bilateral relations, stating that the friendship between the two countries is rooted in a long and rich history of People-to-People exchanges, as well as supported by long-standing diplomatic relations, dating back to 1958 and increasingly strengthening ever since. Over the years, the two countries have built trust, relying on respect for sovereignty, territorial integrity and active solidarity, he said, adding that the historic Royal Visit in May 2016 to Beijing was a founding moment and led to the signing of the Joint Statement on Establishing the Strategic Partnership, by HM the King and the Chinese President. This document has given an unprecedented impetus to the Morocco-China friendship, and yielded tangible results, he underlined. The Minister cited, as an example, a solid growth of 50% in trade over the past five years (from $4 billion in 2016 to $6 billion in 2021) and a substantive increase in Chinese investment, with more than 80 projects underway throughout the Kingdom, including the mega-project of the City Mohammed VI Tangier Tech -initiated in April 2019 in Beijing, on the sidelines of the “Belt and Road” forum. Bourita also highlighted the 20-fold increase in tourism, following the Royal decision to exempt Chinese citizens from visa requirements (June 2016): 200,000 Chinese visitors in 2018 against only 10,000 in 2015. He also recalled that in November 2017, Morocco signed the MoU on the “Belt and Road”, and became the first country in the Maghreb – and one of the very first in Africa – to join the Initiative. On another note, the Minister stressed that far from being hindered by the pandemic, the strategic partnership sealed back in 2016 by HM the King and the Chinese President has proved resilient, noting that the unprecedented challenges posed by Covid-19 have actually given it a new impetus, and demonstrated that solidarity and consistency are structural and enduring components of the relationship between the two countries. He said that Morocco highly value the responsiveness and keenness of the Chinese authorities to meet the needs of Morocco in terms of purchase of medical equipment and protection. Morocco reciprocated by committing among China’s pioneering partners in the clinical trials of the anti-Covid vaccine, and by proactively choosing to rely widely on the vaccine developed in China, as part of the far-sighted Royal management of the pandemic, he added. Building on this steady success, the kingdom has taken a further step by establishing an industrial unit for the fill and finish manufacturing in Morocco of the anti-covid-19 vaccine, which benefits from a pioneering partnership with the Chinese state-owned company, Sinopharm, Bourita noted. “This unit will contribute to the Kingdom’s self-sufficiency and health sovereignty, while consolidating that of the African continent and here lies another aspect of the Partnership between Morocco and China,” the minister explained. In addition, Bourita said that the partnership between Morocco and China also draws its strength from opening up to Africa, noting that the agreement signed provides explicitly a triangular cooperation for the benefit of the continent. Morocco and China will endeavor to jointly start and implement tripartite cooperation projects aiming to promote African’s Sustainable development, he stressed. He assured that the kingdom could play a key role in extending the benefits of cooperation towards the African brotherly nations, for which the Kingdom maintains a strong commitment, recalling that this commitment was clearly expressed by Majesty King Mohammed VI, at the 2015 Summit of the Forum on China-Africa. The minister also said that the Belt and Road opens-up new prospects for trade and investment, and brings additional opportunities consistent with the Kingdom’s New Development Model. The initiative will also benefit from the dynamic input of Morocco, thanks to its political stability, strategic position, economic openness, sectoral potential and connectivity, he pointed out. This initiative, Bourita added, will help realize Morocco and China shared ambition for Africa’s development, thereby creating a triple win South-South cooperation. He concluded that Morocco, which stands out as a key African, Arab and Mediterranean country in the implementation of the “Belt and Road”, is a partner that is as keen as China to make of the “Belt and Road Initiative”, a success story of south-south cooperation.