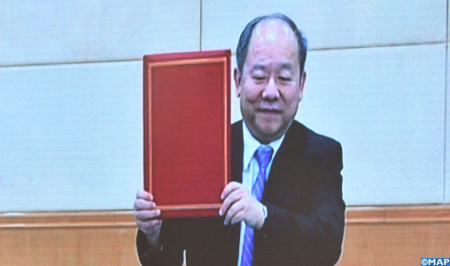 The Belt and Road Initiative (BRI), which carries the spirit of peace and cooperation, openness and inclusiveness, opens a new era in cooperation between Morocco and China, said Wednesday the Vice Chairman of China’s National Development and Reform Commission (NDRC), Ning Jizhe. Speaking at the signing ceremony of the agreement on the Joint Belt and Road Implementation Plan between Morocco and China, held by videoconference, the Chinese official said that the BRI adds momentum to a deeper cooperation in infrastructure and enables the two countries to share the development benefits. “This resembles a new era in cooperation between China and Morocco,” he pointed out. The Chinese official, who underlined that political consultations between Rabat and Beijing have become more smooth, recalled that President Xi Jinping and HM King Mohammed VI upgraded, in May 2016, the bilateral diplomatic relationship to strategic partnership. In November, 2017, the two countries signed the Memorandum of Understanding on the BRI, he said, noting that Morocco has become the first country to join the BRI in the Maghreb region. Mr Ning Jizhe, who welcomed the expansion of trade between the two countries, said that the direct investment from China to Morocco reaches currently 380 million USD, noting that most of this investment goes into infrastructure, mobile parts, telecommunication and fishery. In 2020, bilateral trade reached 4.76 billion USD with a 2% increase compared with the year before, even with COVID-19 Pandemic and a recession in international trade, he pointed out. “We expect trade to break 6 billion record this year,” he said. Regarding the management of the COVID-19 pandemic, the Chinese official stressed that the Sinopharm company and the Moroccan government work closely to promote the phrase III trial, procurement and production of the COVID-19 Vaccine, adding that this cooperation will strengthen economic resurgence and protect the well-being of people. The people-to-people communication becomes closer, he pointed out, noting that “since the breakout of COVID-19 pandemic, people from our countries support and stand with each other.” President Xi Jinping and HM King Mohammed VI attach great importance to bilateral strategic partnership, he said, stressing that Morocco is an important partner in BRI cooperation. In order to promote the BRI high-quality development and the concrete cooperation in various areas, the Chinese and Moroccan governments worked together and discussed with comprehensive consultation the BRI Cooperation Plan. This Plan pinpoints the all-around, multi-layer and multi-areas road map to deepen bilateral cooperation, the Chinese official pointed out. “We do hope we could keep close contact, consolidate the plan implementation, make more tangible achievement, and inject new momentum for BRI high-quality development between China and Morocco in the future,” he said. The agreement on the Joint Belt and Road Implementation Plan between the Kingdom of Morocco and the People’s Republic of China was signed, Wednesday, during a ceremony held by videoconference, by the Minister of Foreign Affairs, African Cooperation and Moroccans Abroad, Nasser Bourita, and the Vice Chairman of China’s National Development and Reform Commission (NDRC), Ning Jizhe. This agreement aims to promote access to Chinese funding provided by the Belt and Road Initiative (BRI) for the realization of large-scale projects in Morocco or for the facilitation of trade, the establishment of joint ventures in various fields (industrial parks, energy, including renewable energy).