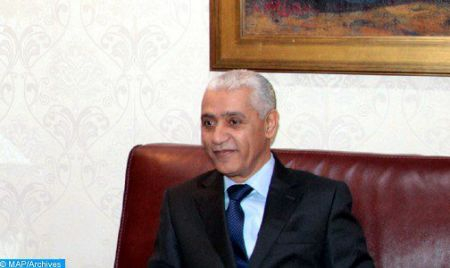 The means to strengthen parliamentary consultation and coordination at bilateral and multilateral levels between the Kingdom of Morocco and the Republic of Hungary were the focus of talks, Wednesday in Rabat, between speaker of the House of Representatives, Rachid Talbi El Alami and the ambassador of the Republic of Hungary in Morocco, Miklós Tromler. During these talks, the Hungarian diplomat praised the good multilateral and bilateral relations between the Kingdom of Morocco and the Republic of Hungary, which have improved over the past decade, through initiatives of consolidation, coordination and consultation on issues of common interest. Quoted in a statement of the lower house, the ambassador said that parliamentary relations between the two countries have undergone a remarkable evolution, resulting in the signing of a memorandum of understanding between the Moroccan House of Representatives and the Hungarian National Assembly on April 29, 2019, adding that the said memorandum emphasized the development of political, economic, cultural and scientific relations between Morocco and Hungary, and the intensification of parliamentary cooperation through regular dialogue and consultation within the framework of the common interests of the two countries, the exchange of information on legislative activities and best practices related to the adoption of laws, the exchange of visits and the encouragement of communication between the standing committees and friendship groups. On this occasion, Tromler informed the speaker of the lower house of the consideration of the President of the Hungarian National Assembly, inviting him to visit Budapest next March in order to strengthen bilateral and multilateral parliamentary relations, added the statement, noting that Talbi El Alami welcomed this invitation and reaffirmed his willingness to exchange views with his counterparts on issues related to security, stability, migration, renewable energy and economic, scientific and cultural cooperation, as well as the exchange of expertise and the strengthening of bilateral and multilateral parliamentary consultation and coordination. Talbi E Alami took this opportunity to review the achievements of the House of Representatives over the past decade, which have enabled it to occupy a place of choice in many continental, regional and international parliamentary bodies and organizations. After praising the distinguished relations between the two countries, Talbi El Alami noted that Rabat and Budapest have a deep-rooted history, as well as experiences that can be shared and put to good use, adding that the lower house is open to all initiatives to support its relations with the Hungarian National Assembly in order to raise the relations between the two countries to higher levels.