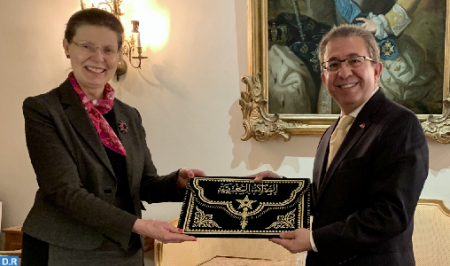 Karim Medrek on Wednesday presented to the Swedish authorities copies of his credentials in his capacity as the extraordinary and plenipotentiary ambassador of His Majesty the King to Sweden. Medrek was received by Ms Maria Christina Lundqvist, Director of Protocol at the Swedish Ministry of Foreign Affairs, to whom he handed over copies of his credentials. This is the first step before the audience which will be granted to him by HM Carl XVI Gustaf, King of Sweden, as soon as the health conditions linked to the COVID-19 pandemic allow it. Morocco’s new ambassador to Sweden seized this opportunity to reiterate Morocco’s commitment to working to strengthen the ties of friendship and cooperation between the two Kingdoms. The diplomat also stressed the importance of consolidating political relations between the two countries. The Moroccan ambassador underlined the economic dynamics and the various social reforms undertaken in Morocco under the leadership of HM King Mohammed VI.