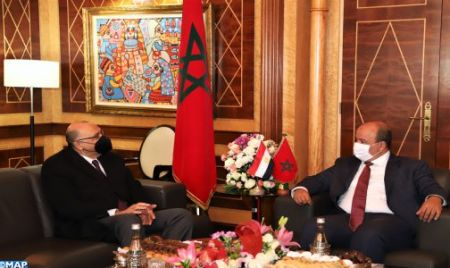 Speaker of the House of Advisors, Naama Mayara, welcomed Tuesday the level of cooperation between Morocco and Egypt in all areas, including economy, tourism and culture. A statement of the House of Advisors received Tuesday by MAP said that Mayara welcomed the willingness of both countries to further promote their bilateral cooperation in view of the potential and opportunities offered in terms of trade and economic exchanges, and this, during a meeting at the headquarters of the upper house with the Egyptian ambassador in Rabat, Yasser Mostapha Kamal Othman. The Moroccan official also praised the excellent level of relations between Morocco and Egypt which are based on mutual respect and draw their strength in the deep historical ties and brotherly relations between the heads of state of both countries, HM King Mohammed VI and His Excellency President Abdelfettah Al Sissi. Mayara also stressed the need to take advantage of all opportunities offered to raise the relations of economic cooperation in order to be equal to the excellent level of political ties between the two countries, the same source said. He emphasized the importance of promoting joint parliamentary action through concrete programs and also the promotion of the role of cooperation and friendship groups called upon to strengthen sustainable and effective links between the two parliamentary institutions, in addition to the consolidation of coordination and consultation in international forums in favor of the interests of the two brotherly countries. For his part, the Egyptian ambassador in Rabat, Yasser Mostapha Kamal Othman, also welcomed the strength of relations between Morocco and his country and the Moroccan and Egyptian peoples, saying that the two countries are determined to further promote their bilateral relations and to consolidate coordination and consultation on all issues, with the aim of achieving a strategic partnership to match the ambitions of the two brotherly peoples and in support of the civilizational and popular ties deeply rooted in history.