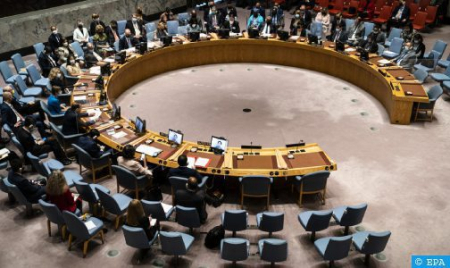 The efforts made by HM King Mohammed VI, in His capacity as Chairman of the Al-Quds Committee, in favor of the Palestinian issue, were highlighted during a high-level debate, held Wednesday at the UN Security Council. Thus, the permanent representative of Egypt in his capacity as chairman of the Arab Group at the UN for the month of January, said that the Group highly commends the continued efforts of HM King Mohammed VI for the benefit of the Palestinian issue, and this in His capacity as Chairman of the Al Quds Committee, under the Organization of Islamic Cooperation. The Arab Group also welcomed, during this meeting devoted to the situation in the Middle East, including the Palestinian issue, the Al-Quds Appeal, signed by HM the King and His Holiness Pope Francis, during the visit of the Sovereign Pontiff to Morocco in March 2019. The Group also emphasized that this Appeal enshrines Al Quds as a city of peace, brotherhood, tolerance and coexistence between the followers of the three monotheistic religions. For its part, the Non-Aligned Movement praised, in a statement sent to the Security Council, the efforts of HM the King, Chairman of the Al Quds Committee, in favor of the Palestinian question. The Movement, which has 120 UN member states, also expressed its high appreciation of the Al Quds Appeal which emphasizes the important role of the Holy City as a symbol of tolerance and mutual respect. It also noted that this Appeal stresses the need to preserve the specificities and character of Al Quds as a city of peaceful coexistence.