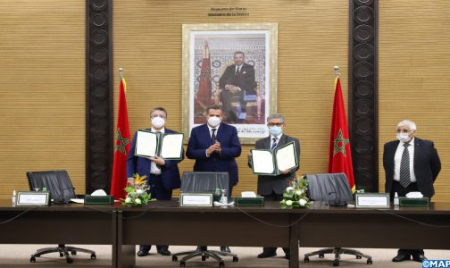 An amendment to the cooperation agreement between the Ministry of Justice and the Royal Institute for Amazigh Culture (IRCAM), which defines the general framework of coordination between the two sides for the integration of the Amazigh into the judicial system, was signed Tuesday in Rabat during a ceremony chaired by the Head of Government, Aziz Akhannouch. This amendment, which marks the desire of both sides to establish an active partnership aimed at strengthening the presence of the Amazigh language in the judicial system, was signed by the Minister of Justice, Abdellatif Ouahbi, and the IRCAM rector, Ahmed Boukous. “Based on the fact that the constitutional consecration of the Amazigh language emanates from a Royal decision and will, without which this stage could not have been taken, we are committed as a government to accelerating the priority strategic projects stipulated in the organic law 26-12 relating to the implementation of the official character of the Amazigh language and its integration in the various aspects of life: education, culture, judicial system and administration”, said Akhannouch during the signing ceremony. In this regard, he stressed the imperative of mobilizing efforts and the human, logistical and financial resources to implement the provisions of this organic law, particularly in terms of completing the legal, organizational and institutional projects, and to translate into practice the two organic laws relating to the officialization of the Amazigh language and the National Council for Moroccan Languages and Cultures. For his part, Ouahbi underlined that the said agreement aims to associate IRCAM with a series of approaches to which his department has adhered within the framework of a new stage making it possible to bring together the conditions for a fair trial, stressing the need to engage an interpreter to assist citizens who do not master the Arabic language before a judge. Thus, 100 new civil servants, 60% of whom speak Amazigh, will be recruited and distributed to the courts in need of Amazigh language interpreters, in application of the high Royal guidelines as well as the government program, the minister told reporters. To this end, he said that a recruitment competition will be open, over the next two days, to graduate students in psychology and sociology, holders of a master’s degree in Amazigh culture and laureates of social assistance institutes. Speaking on this occasion, Boukous welcomed the signing of this agreement which constitutes an important step in the process of implementing the official character of the Amazigh language, noting that the development of human capital is the optimal solution to the problems of integrating the Amazigh language into the various institutions, as stipulated in the said agreement, “considered a pragmatic initiative and an essential step in this field”. In this regard, he reiterated IRCAM’s commitment to support such initiatives, emphasizing that the Institute remains at the disposal of all institutions for the operationalization of the government program in its component related to the implementation of the Amazigh official. This ceremony was held in the presence of several officials, including the Minister of Youth, Culture and Communication, Mohamed Mehdi Bensaid, the Minister Delegate in charge of Digital Transition and Administration Reform, Ghita Mezzour, the deputy president of the Supreme Council of the Judiciary (CSPJ), Mohamed Abdennabaoui, and the President of the Public Prosecution, El Hassan Daki.