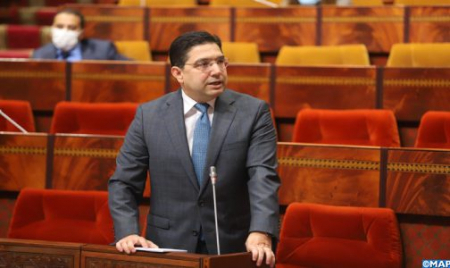 Minister of Foreign Affairs, African Cooperation and Moroccans Abroad, Nasser Bourita, stressed, Monday in Rabat, the need to review the consular map of the Kingdom in order to bring the services closer to the Moroccan community abroad. The Kingdom has so far 56 consulates, with the opening in the last three years of three consulates in Naples, Murcia and Toronto, said Bourita in response to an oral question in the House of Representatives on the improvement of consular services, adding that the goal is not to open more consulates, but rather to review the consular map to accompany the Moroccans of the world. In this sense, the Minister mentioned the possibility of reviewing the consular offices in the suburbs of Paris, Galicia (Spain), northern Italy and in the Gulf countries and Africa in order to bring the consulates closer to Moroccans living abroad, specifying that the improvement of the quality of consular services focuses on 4 areas, namely the improvement of reception conditions, digitization and improvement of the consular performance, services and social actions of proximity. Regarding the first aspect, Bourita said it is related to the improvement of reception conditions, through the rapprochement of consulates of Moroccans abroad, through choosing suitable places housing their headquarters, noting that the Ministry has made great efforts to improve consular buildings, with the acquisition of six new buildings and the change of consulates’ headquarters in nine centers namely: Algesiras, Barcelona, Marseille, Oran, Lille, Rennes, Madrid, Amsterdam and Paris. The Minister also mentioned the upgrading of three consular services in Denmark, Egypt and Saudi Arabia, while five new consulates were acquired in recent years in Antwerp in Belgium and Bologna in Italy. The consulates of Montpellier and Bilbao have been installed in buildings that meet the requirements, he added. Regarding the second aspect relating to the digitalization and promotion of consular performance, the Minister recalled the creation of the website “Consulate.ma”, which has recorded nearly 6.3 million visitors and the publication of a unified consular guide, which provides information to Moroccans residing abroad on the required documents, in addition to the establishment of the service “birth” for the transcription of births remotely. In this sense, Bourita said that the new law on civil status will facilitate things for Moroccans living abroad, adding that since 2019 appointments have been launched remotely, through a new platform, with nearly 1,370,000 appointments made online. The Ministry is working to enable citizens to obtain their national identity cards and travel passports remotely, said Bourita, stressing that “we are working today in collaboration with the Ministry of Interior and the Directorate General of National Security, to materialize in the coming weeks the project to obtain remotely the national identity card in 20 consular services. This service will then be generalized, like that of birth certificates, he said. The third aspect concerns proximity services, which can be achieved, according to Bourita, in two ways. The first concerns mobile consulates and the second is related to open doors during weekends, especially in European countries. The establishment of consulates in transit points, whether in ports or in some airports, is intended to allow the Moroccans abroad to obtain a set of documents during their travel, he noted. The fourth aspect relates to the social actions of proximity, including those related to visits to Moroccans serving prison sentences, or those concerning the repatriation of citizens in difficult situations, he said. Bourita recalled, in this regard, that over the past two years, about 1,000 visits to prisons have been made, and many citizens who find themselves in difficult situations have been repatriated, in addition to the continued implementation of the program to support schooling for children of poor families in some countries. On this occasion, the Minister said that the number of members of the Moroccan community established abroad registered in consular centers is now about 5.3 million people, a number that may exceed 6 million if we include the non-registered.