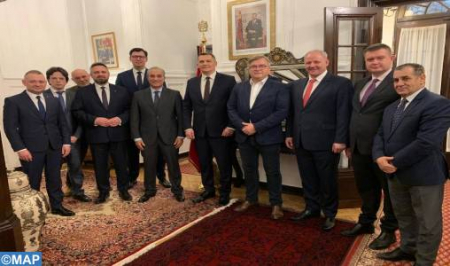 Morocco’s ambassador to Poland, Abderrahim Atmoun, on Tuesday held a meeting with members of the Poland-Morocco Parliamentary Friendship Group at the Polish lower house, which focused on the means to strengthen political dialogue between the two countries. This meeting allowed both parties to exchange on the state of parliamentary relations between Morocco and Poland and ways to boost and further strengthen political dialogue, including cooperation between the legislative institutions of the two countries, according to a statement from the Moroccan embassy. On this occasion, members of the Morocco-Poland Parliamentary Friendship Group expressed their wish to meet very soon their Moroccan counterparts in order to exchange on the means of reinforcing bilateral relations. In this regard, they welcomed the major reforms undertaken in recent years under the enlightened leadership of HM King Mohammed VI and commended the exemplary management by Morocco of the fight against the Covid-19 pandemic, including the success of the country’s vaccination campaign. The Polish MPs also praised the role of Morocco, under the leadership of the Sovereign, both regionally and internationally, as a provider of peace, stability and a real vector of growth and development in the region and in the African continent. In this context, they stressed the positioning of the Kingdom as a hub for Africa, according to the same source. In addition, the members of the Parliamentary Friendship Group highlighted the efforts of the Kingdom in favor of peace and stability in the region, especially with regard to the Libyan issue and welcomed the role played by Morocco in the fight against terrorism and radicalization, irregular migration and transnational crime. They also expressed their support for the Morocco-EU partnership and pledged to work towards its deepening. Regarding bilateral cooperation, the Morocco-Poland Friendship Group welcomed the economic dynamics recently initiated between the two countries and expressed the wish to further strengthen economic and trade ties and to multiply initiatives in this framework, the statement noted.