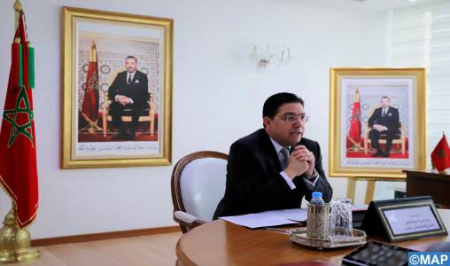 The Minister of Foreign Affairs, African Cooperation and Moroccans Abroad, Nasser Bourita, on Wednesday held talks by videoconference with the Secretary General of the Cooperation Council for the Arab States of the Gulf (GCC), Nayef Falah Al-Hajraf. These talks, which focused on the relations of strategic partnership between Morocco and the GCC since 2011, were an opportunity to welcome the achievements made under the leadership of His Majesty King Mohammed VI and His brothers, the leaders of the Gulf countries, said a press release issued by the ministry. On this occasion, Mr. Bourita expressed the thanks and consideration of Morocco, under the leadership of His Majesty the King, to the GCC and to the brotherly Gulf countries for their united and unwavering stance with the Kingdom, as expressed in the final declaration issued at the end of the 42nd session of the Supreme Council of the GCC, held on December 14, 2021, in Riyadh, and reaffirming the constant positions of the Council in favor of the Moroccanness of the Sahara and its unchanging support for the Kingdom’s territorial integrity. For his part, the GCC Secretary General reaffirmed the unwavering position of the Council in favor of Morocco’s sovereignty over its Sahara and its territorial unity, stressing that no solution to this artificial regional conflict can be achieved outside the framework of the sovereignty of the Kingdom of Morocco and its territorial integrity. Al-Hajraf also praised the Kingdom’s solidarity with the GCC countries and their national causes, as well as the distinguished level of partnership relations binding the two sides, stressing the GCC’s strong determination to further consolidate these relations in accordance with the aspirations of His Majesty the King and His brothers, the leaders of the GCC countries. Regarding the strengthening of the partnership between the two sides, Mr. Bourita reaffirmed the Kingdom’s readiness to continue to work with the General Secretariat of the GCC and the Gulf countries to lay the foundations for a new stage of qualitative cooperation, aimed at developing a renewed and favorable partnership framework to the strengthening of political, economic, commercial and human relations, in concretization of the vision of His Majesty King Mohammed VI contained in the Royal Speech delivered at the Morocco-Gulf Countries Summit, held on April 20, 2016, in Riyadh. The minister welcomed the constant solidarity shared by Morocco and the GCC countries, reiterating in this regard the condemnation by the Kingdom of Morocco, King, government and people, of the continued attacks by the Houthi militias and their supporters against civil and economic facilities in Saudi Arabia and the United Arab Emirates. He also reiterated Morocco’s rejection and condemnation of all forms of flagrant Iranian interference in the internal affairs of the Gulf countries, particularly in the brotherly Kingdom of Bahrain, recalling that Morocco, as underlined by His Majesty the King at the Morocco-Gulf Countries Summit held on April 20, 2016, in Riyadh, “has always perceived the security and stability of Gulf countries as an intrinsic part of its own security and stability”. Mr. Bourita has extended an invitation to the GCC Secretary General to pay a working visit to Morocco, whose date will be fixed later, the release read.